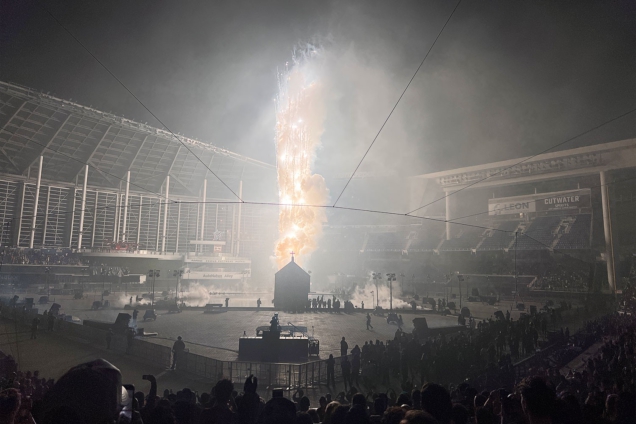 On Tuesday, West, 44, celebrated the release of his album Donda 2, following Donda, which was released in August.

West’s performance also included a nod to estranged wife Kim Kardashian when he sampled a line from her Saturday Night Live monologue. The Keeping Up with the Kardashians alum, 41, made her hosting debut on the sketch comedy show in October.

At the beginning of the song “Sci-Fi,” Kardashian’s voice can be heard saying, “I married the best rapper of all time. Not only that, he is the richest Black man in America. A talented, legit genius who gave me four incredible kids.”

Another song featured a voiceover of Kamala Harris’ “We Did It Joe” viral moment following the 2020 election.

The entire stadium was pitch-black throughout the performance, except for a burning house — surrounded by water — in the centre of the stage to symbolize West’s childhood home in Chicago.

Attendees at the event included Elon Musk, French Montana and Rick Ross, among others.

Last week, West revealed that he would only be releasing the album on his Stem Player.

He shared the news on Instagram, posting alongside a song snippet that “Donda 2 will only be available on my own platform, the Stem Player. Not on Apple Amazon Spotify or YouTube.”

“Today artists get just 12% of the money the industry makes,” he claimed. “It’s time to free music from this oppressive system. It’s time to take control and build our own. Go to stemplayer.com now to order.”

The $200 device “ships with Donda” and allows the user to “customize any song,” according to the website.

“You can download new music from stemplayer.com. You can play 4 different elements of the track: vocals, drums, bass and music. It also has a MP3 player available,” West wrote in another post.

In a follow-up post, West shared what appeared to be the album’s tracklisting, while in another, he urged his followers to “go to stemplayer.com to be a part of the revolution.”

The rapper first announced he would drop the album in January, by posting a photo of a burning house with the date Feb. 22, 2022, emblazoned over.