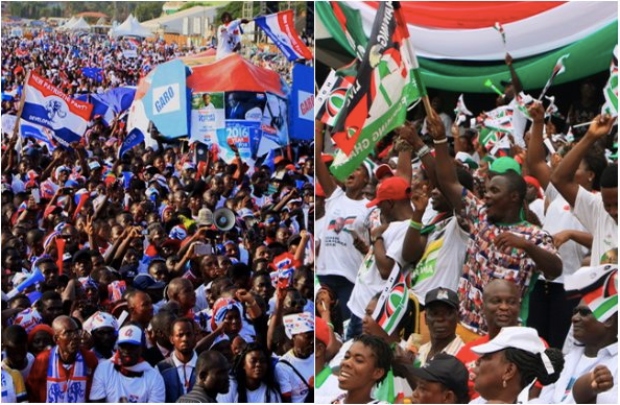 Ghana’s political space has been characterized by a cocktail of issues, events, and activities in 2022 as political parties commenced preparations towards the 2024 general election.

2022 was a busy calendar year for Political Parties, who by constitutional demand, elected officers at the branch, constituency, regional, and national levels to steer the affairs of their Parties in various offices for the next four years.

Although, the Electoral Commission did not organise any national election this year, it elicited debate and discussions over its proposal to use the Ghana Card as the sole identity document for the continuous registration exercise.

In this article, we highlight some key events that occurred within the year to jog your memory and outline some expectations for next year.

The New Patriotic Party (NPP) crowned its internal elections with a National Delegates Conference at the Accra Sports Stadium on Saturday, July 16, 2022.

One of the contest’s key surprises was the ousting of the then incumbent General Secretary of the Party, Mr John Boadu by Mr Justin Kodua Frimpong.

Mr Stephen Ayesu Ntim, who was also contesting the Chairmanship position for the fifth time, clinched the position.

On October 13, 2022, Mr Johnson Asiedu Nketia, the then General Secretary of the National Democratic Congress (NDC) publicly declared his intention to contest the National Chairmanship position of the Party during a radio interview.

This announcement shook the pillars of the Party given that the then Chairman of the NDC, Mr Samuel Ofosu Ampofo was completing his first term in Office and had expressed the desire to serve the Party again in the second term.

After weeks of heated campaigns, it appeared that it would be a tight race between the two giants of the Party.

But Mr Nketia stole the show at the Party’s National Delegates Congress held at the Accra Sports Stadium on December 17, 2022, securing a landslide victory.

EC proposes use of Ghana Card as the sole identity document

The EC explained that the move would help phase out the guarantor system often exploited by non-eligible persons to get onto the electoral register.

But some political commentators and stakeholders kicked against the move, fearing that it would disenfranchise Ghanaians who do not have the Ghana Card.

The Paramount Chief of the Asogli State, Togbe Afede XIV in June this year announced that he had rejected an amount of GHS365,000 that was paid into his account as ex-gratia for being a member of the Council of State.

The former President of the National House of Chiefs said he returned the money to the State because he “was very uncomfortable” with the payment and deemed it “inappropriate for a short, effectively part-time work.”

The move sent tongues wagging with many questioning the relevance of the Council of State in the country’s democratic architecture.

At a seminar held at his residence in Peduase in November this year, Former President John Agyekum Kufuor proposed the creation of a Second Chamber to replace the Council of State to enhance effective democratic governance.

He said the proposed Chamber should not solely be constituted based on democratic line, but on proven experience, public spiritedness, prudence, maturity, and care for national inclusiveness.

At a press conference at Parliament House, the MPs also asked the President to sack Mr Charles Adu Boahen, a Minister of State at the Finance Ministry.

They said that had become necessary to restore hope in the financial sector and reverse the downward trend of the economy.

The MPs later accepted to let the Finance Minister finished the ongoing negotiations with the International Monetary Fund (IMF) for a bailout for the country after they had met President Akufo-Addo over the matter.

Minority’s Vote of Censure against Ofori-Atta

On October 25, 2022, the Minority in Parliament filed a motion for a vote of censure on Mr Ofori-Atta, citing mismanagement of the economy and ethical concerns, among other issues.

An Ad-hoc Committee was subsequently constituted to probe the allegations against the Finance Minister.

The Committee on November 25, 2022 laid its Report before the House.

On December 8, 2022, the House voted on the motion, during which the Majority side staged a walk-out, making the Minority’s move unsuccessful.

DCE for Krachi East found dead in a hotel room

In September this year, the Municipal Chief Executive (MCE) for Krachi East in the Oti Region, Francis Kofi Okesu was found dead in a hotel room in Kumasi.

The cause of his death is yet to be established.

The Year 2023 would be a busy period for all political parties particularly for “smaller” parties who are yet to conduct their internal elections.

The NPP and the NDC would elect their flagbearers to lead them in the 2024 elections and parliamentary candidates.

The Parties are yet to publish their activities for the year. But by convention, it is expected that the Parties would first conduct parliamentary primaries in orphan constituencies – where they do not have MPs.

The EC is also expected to conduct its continuous voter registration exercise for new eligible voters. But one critical issue would be whether Parliament would approve the new C.I. for the registration that would make the Ghana Card the sole document to prove one’s identity.

Another key issue to look out for in 2023 would be whether President Akufo-Addo would heed to calls to reshuffle his ministers and restore confidence in the Government ahead of 2024.

DISCLAIMER: The Views, Comments, Opinions, Contributions and Statements made by Readers and Contributors on this platform do not necessarily represent the views or policy of Multimedia Group Limited.
Tags:
NPP and NDC