Kim Kardashian West is to change the brand name for her latest fashion line following accusations of cultural appropriation.

Some Japanese people on social media complained that the trademarked brand, Kimono Intimates – a play on her name – disrespected traditional clothing.

But on Tuesday, she said she would be announcing a new name in due course.

The reality show star-turned-designer posted on Instagram: “I am always listening, learning and growing… When I announced the name of my shapewear line, I did so with the best intentions in mind.”

She added: “After careful thought and consideration, I will be launching my Solutionwear brand under a new name.”

Being an entrepreneur and my own boss has been one of the most rewarding challenges I”™ve been blessed with in my life. What”™s made it possible for me after all of these years has been the direct line of communication with my fans and the public. I am always listening, learning and growing – I so appreciate the passion and varied perspectives that people bring to me. When I announced the name of my shapewear line, I did so with the best intentions in mind. My brands and products are built with inclusivity and diversity at their core and after careful thought and consideration, I will be launching my Solutionwear brand under a new name. I will be in touch soon. Thank you for your understanding and support always.

The kimono, a loose long-sleeved Japanese robe, dates back to the 16th Century. 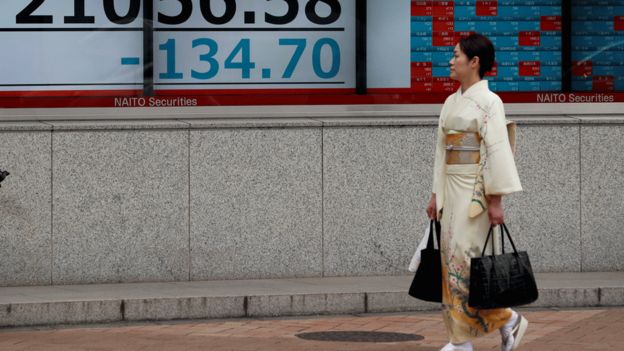 Kimonos are sometimes passed down through families – photo credit: Reuters

According to the Victoria & Albert Museum, “the kimono became the principal item of dress for all classes and sexes in Japan from the 16th Century and is still a symbol of Japanese culture”.

One Japanese woman, Yuka Ohishi, told the BBC last week: “We wear kimonos to celebrate health, growth of children, engagements, marriages, graduations, at funerals. It’s celebratory wear and passed on in families through the generations.

“[This] shapewear doesn’t even resemble a kimono – she just chose a word that has Kim in it – there’s no respect to what the garment actually means in our culture.”