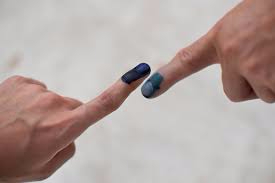 Local content received a major boost ahead of Wednesday’s polls, with indigenous companies being given opportunity, for the first time, to print all ballot papers.

The story, however, is different for indelible ink, a key election material which continues to be imported.

Efforts by the Kwame Nkrumah University of Science and Technology to draw attention to ink produced by its Chemistry Department remain unsuccessful.

For over a decade, KNUST has drawn attention to its indelible ink as a component of election materials which can save the nation foreign exchange.

But yet, another general election passed without the ink being used in the just ended elections.

Authorities speculate fear and suspicion about the ink being tampered with could be responsible for the reluctance of the Electoral Commission to try it.

A scientist at the Chemistry Department, Dr. Godfred Darko, however, says it is impossible to wipe off indelible ink when it comes into contact with the skin.

“There was this fear that if we were able to produce it here, we will be able to wipe.

Once indelible ink sticks with the skin you’re not able to remove it until it peels off. Any indelible ink produced at KNUST or India or whatever will come into contact with your skin and react,” he said.

But according to Dr. Darko, the KNUST product will stand tall among most of the indelible inks being imported, adding, it can be customized to meet buyers’ standard to make it last for a specified period.

Dr. Darko says the initial proposal to the Electoral Commission to produce the ink fell through due to fear it can easily be manipulated.

Nonetheless, he concedes the university has no capacity to produce the ink in large quantities because it is yet to go into commercial production.

He suggests a small contract in a local government or by-election will be good avenue to try the ink.