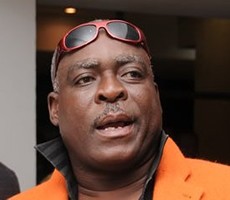 Renowned Ghanaian actor, Kofi Adjorlolo, has lost his wife-to-be, Ms Charity Nyarko, at a private hospital in Awoshie, a suburb of Accra Monday.

The grief-stricken Kofi Adjorlolo who had planned to marry 49-year-old Charity Nyarko in December this year confirmed to Peace FM, “It is true; I lost the woman I have planned to marry after a very long time”.

According to him, plans were far advanced for them to finally tie the knot as husband and wife in December.

Narrating the cause of death, Adjorlolo said, “I had a distress call on Sunday to come home immediately because Charity, popularly called ‘Mother’ was in grave danger… When I got home, I saw that she had become very anaemic but after the elder sister who is a retired nurse examined her, it was evident Charity had fibroid so we had to rush her to the Mary Lucy Hospital located Awoshie Last Stop.”

He further recounted that the medical team at the hospital concluded that to save Charity’s life, she needed to undergo surgery, so he (Kofi) got in touch with Charity’s sisters to give their consent to enable doctors go ahead with the operation.

“After all the necessary documentations, the operation began… while her sister went searching for pints of blood… She first went to Korle-Bu where luckily she was able to purchase some units of blood… she marched on to the Ridge Hospital where she was told no blood was available for sale…

“Later she trekked to the 37 Military Hospital where she had one pint of blood… But unfortunately, Charity had lost so much blood during the operation that when her sister returned to the hospital with the pints of blood, it was too late… She had been declared dead,” he sobbed.

The former broadcast journalist also revealed that some residents of Gbawe, Anyaa, NIC, Awoshie Last Stop, all suburbs of Accra including those who had lost relations at the same hospital were so enraged that they wanted to take the law into their own hands by razing down the hospital.

“My lady’s death shouldn’t be the cause of any agitation so I want to use your medium to ask them to calm down and I’m cautioning them that there is no need for them to make a case because I believe very strongly that the doctors at Mary Lucy Hospital did what they could to save ‘Mother’, my lady.

“So I’m pleading with them, they shouldn’t indulge in anything criminal and untoward because of my lady’s death. If they have anything against the Hospital they should write a petition to the appropriate quarters,” he advised the irate residents.