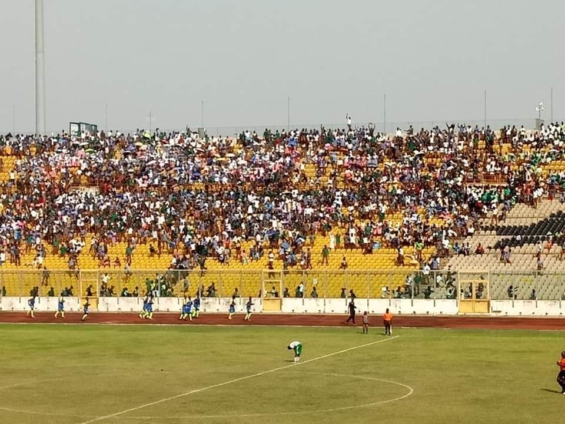 File: Inter-school soccer competition at the Babayara stadium in the Ashanti Region

Football enthusiasts in Kumasi are raising concerns over the introduction of e-ticketing for the Asante Kotoko-Accra Hearts of Oak match on Sunday.

Supporters of the two clubs have registered their displeasure when it emerged tickets for what football pundits describe as the super clash will be sold electronically.

The supporters, observed the last time tickets were issued electronically during a World Cup play-off between Ghana and Nigeria at the Baba Yara Sports Stadium was marred with implementation challenges.

According to them, some supporters could not verify tickets bought online, a situation which paved the way for ticket racketeering.

Government, through the National Sports Authority (NSA) introduced the E-Tickets to address concerns over long winding queues ahead of the match.

But in an interview with Luv Sports, some supporters of Kumasi Asante Kotoko and Hearts of Oak have kicked against the online sale of tickets ahead of Ghana’s version of El Classico.

“With the online ticketing, it’s very worrisome because of how to get the validity of the tickets. You cannot be too sure that whether that ticket you have acquired is original and this can bring a lot of conflicts at the stadium,” one Asante Kotoko supporter said.

“We have to go by the manual system of ticketing. That will be better for us.” He added.

Another, a Hearts of Oak fan, wants authorities to sell tickets manually and electronically to address challenges that may arise.

“They should just blend it; they should sell some of the tickets at the gates and at the same time too, they should go by the online one because not everyone is educated to use the code to access the tickets. So it’s better they come to the stadium to buy it,” he said.