Aduana Stars – will more than likely retain their 2point advantage atop the log as they take on troubled Medeama SC at home in Week 7 of the Ghana Premier League this Wednesday.

Ahead of their week 8 clash with rivals Hearts of Oak, Asante Kotoko will work on holding on to the second spot with a win over visiting WAFA whilst the Phobians will attempt to make up lost ground with a win over Tema Youth, and third placed Bechem Utd will have the chance to maintain the pressure on neighbors Aduana Stars as they host Elmina Sharks.

Bottommost Gt. Olympics will seek to revive their campaign with their first victory when Inter Allies pays them an unfriendly visit. It was a heartbreak for the wonder club last Sunday as they did enough for the three points against perennial rivals Hearts of Oak but were undone by poor officiating.

The referee missed out on awarding them what looked two glaring spot kicks, the result of handballs in the box but should take part of the blame for not being clinical in front of goal and against Inter Allies, they cannot afford to be wasteful.

For Inter Allies, the lack of an out and out striker is a problem which must be solved early or their troubles may will continue unabated and perhaps lead to the firing of Coach Prince Owusu.

Allies won the previous two meetings by a lone goal.

Accra Hearts of Oak have their sight set on victory ahead of the super clash against Kotoko but it will surely not be easy against Tema Youth at the latter's favorite home grounds.

Tema Youth are undefeated at home and will seek to continue that impressive record against a Hearts side, that is slowly adapting to the methods of Scottish tactician Frank Nuttall.

Nuttall has two wins in his first four games, only one defeat – against Aduana Stars away. His imprint is yet to be felt on the team but a couple of changes in starting lineup has proved very useful. The likes of Cosmos Dauda, Samudeeen Ibrahim are second best under Nuttall.

Hearts have targeted three straight wins – operation nine points – one won against Olympics, they would relish a win over Tema Youth and crown it all with victory against sworn rivals Kotoko.

* Hearts of Oak have won the Ghana League title on 19 occasions since the competition started in 1958.

* Hearts of Oak worse performance in the Ghana League since the competition started in 1958 is 13th with 40 points in the 2014-15 season.

* Tema Youth are currently 10th with 7 points after Day 6 games while Accra Hearts of Oak on the other hand are 6th with 9 points on the Ghana top-flight log.

Kotoko, who rarely lose games that precede clashes against sworn rivals Hearts of Oak, will be expected to redeem themselves with a win over WAFA after stuttering at Bolga All Stars.

The Porcupine’s stalemate this past weekend saw them drop two points behind leaders Aduana, but victory against WAFA will do them a lot of good in the standings. Key players like Ollenu Ashittey, Kwame Boahene and Baba Mahama who missed the trip to Tamale could be fit to face the Academy boys.

Kotoko have the upper hand and it would take WAFA producing something extraordinary – which they are noted for doing away from home – to upstage Zdravko Lugarusic's side.

It is worth adding WAFA have better record against Kotoko, having won three of six. Kotoko, though, won 2-1 at home last season.

* Asante Kotoko have won the Ghana league title on 23 occasions since the competition started in 1958.

* Kumasi Asante Kotoko are currently 2nd with 14 points after Day 6 games while West African Football Academy on the other hand are 8th with 8 points on the Ghana top-flight log. 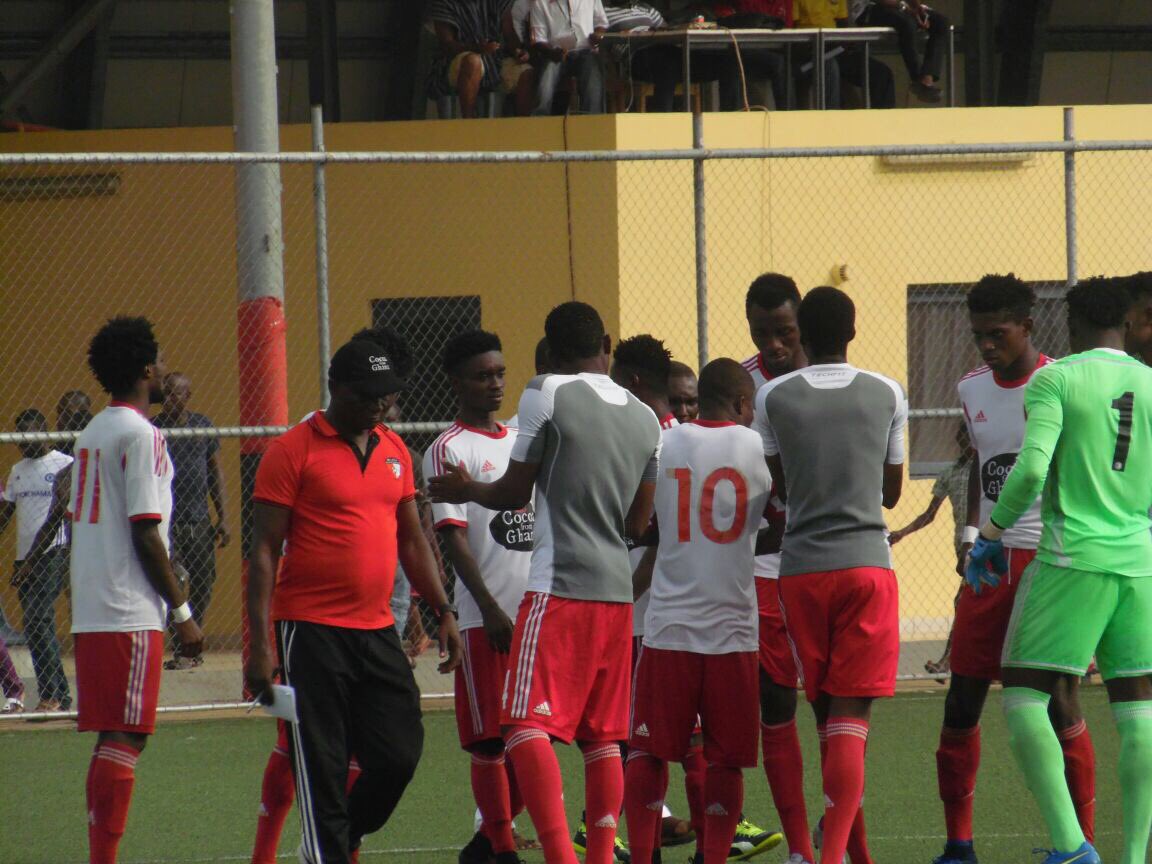 League leaders Aduana could extend their unbeaten run against troubled Medeama whose manager Evans Adotey is facing the sack after a string of poor results with former coach Tom Strand lurking around.

The Dormaa-based side demonstrated character to overcome early setback to pick up three points at Inter Allies. The performance was sensational especially in the second half. Yusif Abubakar is making absolutely good use of the quality at his disposal.

Unlike Aduana, Medeama have surprisingly lost their way after a bright start. Pressure is on Evans Adotey to turn club's fortunes around or may well be replaced at the end of the week. The Mauves have lost three and drawn two of last five matches and cannot afford another disappointment on Wednesday which means a five star performance is required to take maximum points.

Medeama have failed to score in their last three games against Aduana.

* Aduana Stars are currently 1st with 16 points after Day 6 games while Medeama on the other hand are 12 with 5 points on the Ghana top-flight log.

Buoyed by their shock win over Medeama, All Stars are expected to move up the standings by making light work of bad travelers Ebusua Dwarfs.

After a stuttering start to their title defense, the champions appear to have found their mojo – churning out super performances both home and away. Also, they are on three games winning streak.

Dwarfs with their deplorable away performance will find it tough to pick a point in this one.

* Wa All Stars won the Ghana Premier League title with 51 points in the 2015-16 season. And they are the 11th and still remains the last new club to win the title.

* Ebusua Dwarfs won the 1967 Ghana League title which was played on knock-out bases. Dwarfs won the tournament through toss of coin, after drawing 1-1 on two occasions with Sekondi Eleven Wise in the final.

* Wa All Stars are currently 4th with 10 points after Day 6 games with one outstanding game while Ebusua Dwarfs on the other hand are 11th with 7 points on the Ghana top-flight log.

This is the first premier league meeting between the two clubs and the advantage goes to Berekum Chelsea. It should be straight win for the Blues considering their impregnable record at home. Bolga, albeit, given their best against second placed kotoko.

* Bolga All Stars have so far played 1 AWAY match in the month of MARCH in the GPL since February 12 when they had their debut game in the competition.
04/03/17 Tema Youth 2-0 Chelsea
L1 GF0 GA2

* The last AWAY side to prevent Berekum Chelsea from scoring @ HOME in the GPL is Kumasi Asante Kotoko who secured goal-less drawn game on 19th Feb. 2017 in match Day 2 in the 2016-17 season.

* Bolga All Stars have so far kept 1 CLEAN SHEET out of 6 games in the Ghana premier league since February 12.

* Berekum Chelsea are currently 7th with 8 points after Day 6 games while Bolga All Stars on the other are 15th with 4 points on the Ghana top-flight log.

Liberty could deepen the woes of AshGold after Bechem United humiliated them at home. The Miners are in a sorry state following three straight losses and if care is not taken they may drop further down the table. Their position is 14th.

The Scientific soccer lads, though, coming from behind to beat Dwarfs, coupled with AshGold’s troubles lately are still not favorite. The former champions can win this to get their campaign back on right track

* Liberty Professionals Best position in the Ghana Premier League since 1999 is 3rd with 48 points in the 2002 season.

* AshGold (Goldfields) worse performance in the Ghana Premier League is 14th with 26 points in the 2003 season. PLAY OFF

* AshantiGold are currently 14th with 4 points after Day 6 games while Liberty Professionals on the other hand are 5th with 9 points on the Ghana top-flight log.

Both teams have momentum going into this game after winning over the weekend but it was Bechem's which caught attention. The Hunters have started profiting from their participation in the CAF Confed Cup.

Led by striker Ahmed Toure who sits top of goal king race with five goals, Bechem have won four successive games and will be eyeing a fifth win against Sharks.

For the latter, this game is an opportunity to win their first away match in the Ghanaian topflight. They have been impressive at home but same cannot be said for away games as their defensive, counterattacking approach have failed woefully.