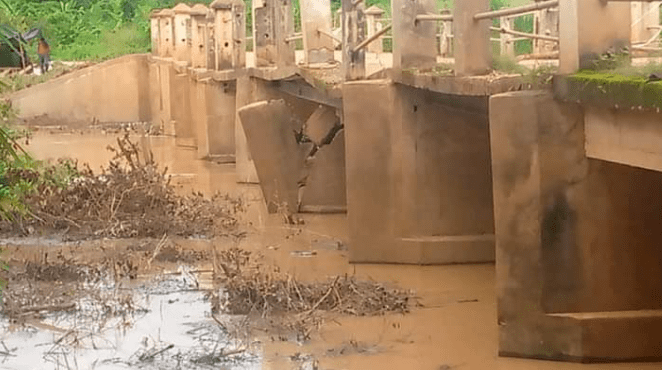 Residents of Kotokuom in the Atwima Mponua District of the Ashanti region have expressed worry about the poor nature of the only bridge linking several communities in the area.

According to them, the situation impedes commercial and agricultural activities.

A resident, Kofi Mensah Appiah told JoyNews many farmers are unable to transport farm produce to their homes and market centers.

The aggrieved residents said the bridge has been left to rot for many years.

They alleged that the District Assembly has failed to heed to their calls despite attempts made.

“Our greatest fear is that if immediate interventions are not made, this bridge will cause something tragic one day. We’ve made calls to the DCE and the MP but they continue to remain adamant to our plights.”

Drivers are also worried; saying the current state of the bridge is impeding their businesses.

They said heavy-duty vehicles will not be allowed to ply the road lest a tragedy occurs.

“Anytime we get to the bridge, we have to stop and the passengers will walk across the bridge before we can continue our journey, so it’s very disturbing,” a resident, Mary Achiaa lamented.

They have therefore called on the government to come to their aid by reconstructing the bridge.