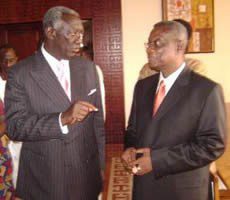 President Mills in his message to the nation on Sunday, promised his government’s commitment to ensure that the $3 billion Chinese loan is used judiciously.

But former President John Agyekum Kufuor in an interview with Joy News stressed the need for President Mills and his government to deliver on the promises and not to repeat the mistakes of 2011.

He said what Ghanaians need to see are the physical evidence of the loan and not mere talk.

“It is one thing getting some money and another applying it judiciously. So we wait and see. The money is a loan not a grant and Ghanaians at the end of the day will have to repay,” he said.

He said even though President Mills may be a candidate, he must ensure that the added responsibility of superintending the political process must be undertaken with due regard to the interest of all parties involved.

Meanwhile a Political Science lecturer at the Kwame Nkrumah University of Science and Technology, Kwasi Amarkye is also calling on President Mills not to focus only on infrastructural development but also pay more attention to the economic plights of the average Ghanaian.

He says as the nation focuses on the upcoming elections, it is important to consider areas such as agriculture.

Speaking to Joy News, Mr. Amarkye said “over the years governments in the fourth republic have not demonstrated that they are going to work in that direction,” adding “that is something that could be done. A massive investment into rice alone can alleviate the plight of many Ghanaians.”