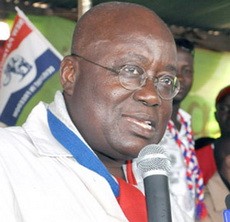 Dr. Kwame Okoampa-Ahoofe, Jr., Associate Professor of English, Journalism and Creative Writing at Nassau Community College of the State University of New York is a known columnist by many Ghanaians especially those who love to read feature articles on political, economic and social issues about Ghana. His thousands of articles are mainly littered on multiple Ghanaian websites and everybody knows where his heart is as far as political party affiliation is concerned.

To make the story even juicier, Okoampa-Ahoofe is the darling of the New Patriotic Party (NPP), who defends Nana Addo Dankwa Akufo-Addo, NPPs Presidential Candidate for the 2012 elections on any given day. I have never read any article of his that he has ever raised a finger on Akufo-Addo. In fact, as a citizen of Akyem and someone related to Akufo-Addo, the Associate Professor has adopted the see no evil, hear no evil and speak no evil attitude on any issue bothering on Akufo-Addo.

And to the amazement of everybody, Okoampa-Ahoofe has done his bit of defense of Akufo-Addo on everything very religiously. You will not want to read the hateful and terrible comments that people spew on Okoampa-Ahoofe’s articles but this Akufo-Addo Diaspora Soldier has soldiered on to the astonishment of even NPP supporters. He had never been bothered by any insults on any article as far as the article is promoting or guarding the tainted image of Akufo-Addo.

Therefore, if for the very first time you read an article in which Dr. Kwame Okoampa-Ahoofe, Jr., the brash defender of Akufo-Addo, is questioning the judgment of Akufo-Addo on the unending story of Judgment Debt Controversy that seems to have engulfed the country since November 2011, it gives you the biggest cause for concern. I can say with all certainty that Okoampa-Ahoofe will be the very last man standing for Akufo-Addo; therefore, if he has dared to criticize him on the judgment debt saga, then it is very obvious that Akufo-Addo has indeed crossed the line.

Barely a week ago, Nana Akufo-Addo, who has been junketing around the country slamming the NDC government on the Woyome saga and even stated emphatically and multiple times that he will never allow anything “Woyome” in his dream government, got the rudest shock of his life when he was exposed at a press conference organized by the government and addressed by Samuel Okudzeto Ablakwa, Deputy Information Minister, that Akufo-Addo wrote a letter dated October 3, 2011, recommending that the Ministry of Finance should pay about $1.3 Million to the Great Cape Company of Switzerland for the wrongful termination of a contract to supply clinker to the Ghana National Procurement Agency (GNPA). The incident occurred under the erstwhile General F. W. K. Akuffo’s led Supreme Military Country regime in 1978. To buttress this revelation, a copy of the letter written by Akufo-Addo was produced at the press conference.

But the NPP immediately jumped on the revelation slamming it as nothing to write home about. Whilst somebody even stated that the NDC government “scored an own goal” in their futile attempt to rope in Nana Akufo-Addo in the judgment debt saga, other NPP folks decided not to talk about the double standard and shameful behaviour of Akufo-Addo but rather decided to mock the Information Minister, Fritz Baffour, for introducing Ablakwa during the press conference.

Therefore, for about a week now, the NPP folks who have been feeling the heat of the role played by Akufo-Addo in the Great Cape Company story have not offered any credible reason/s as to why Akufo-Addo did what he did, whilst Akufo-Addo, as usual has also been mute on that issue. You know very well that Akufo-Addo never talks about any issue concerning him.

But Okoampa-Ahoofe, NPP Chief Defender has a different take. Now hear him in his own words, “Now, where Nana Akufo-Addo’s error in judgment comes up regards the official letter that the now-presidential candidate of the main opposition New Patriotic Party (NPP) is alleged to have written to the extant Minister of Finance, asking for a payment to be made to the Great Cape Company. One professionally expects that in 2001, as Ghana’s newly-appointed Attorney-General and Minister of Justice, Nana Akufo-Addo’s aforesaid letter had been duly copied to the plaintiffs. If so, then the former NPP-MP for Akyem-Abuakwa South ought to have flatly refused to “authenticate” the same letter to Dr. Nat Tanoh, the local representative of the Great Cape Company ten long years later!”

Okoampa-Ahoofe continues, “In other words, other than doing so purely on the informal basis of friendship – or something clearly bordering on the extra-professional – Nana Akufo-Addo ought not to have written his October 3, 2011 letter, allegedly seeking to authenticate his original letter of more than a decade earlier.”

This is what the NPP folks cannot seem to understand and are beating about the bush rather than venturing into the bush and taking the bull by the horn by saying that what Akufo-Addo did was wrong. The NPP cannot say this because the Woyome issue is part of their campaign message so openly saying that Akufo-Addo was dead wrong in writing the letter will knock off their so-called Woyome campaign message.

Now Okoampa-Ahoofe has shamed the NPP by pointing out that what Akufo-Addo did was wrong and his article would be further proof that what the NDC exposed concerning Akufo-Addo was the right thing to do. You cannot continue to slam something and be exposed for doing something related to the same thing and say that yours is no big deal.

The NPP can run but they cannot hide. They can weave and even adopt the rope-a-dope strategy which they have used effectively in the past but they cannot run away from the fact that Akufo-Addo is equally guilty when it comes to judgment debt payments. If Akufo-Addo is not guilty, why is it that it is his hirelings who are defending him whilst he is completely quiet about the issue.

Akufo-Addo must prove to Ghanaians that he is his own man by coming out to say why he did what he did on the Great Cape Company debt issue. He is gradually becoming a wanna-be-president who cannot talk about any controversy he has been implicated. Ghanaians should take note that if Akufo-Addo even today cannot address any issue concerning him, what then will happen if we mistakenly vote him into power and something dreadful happens.