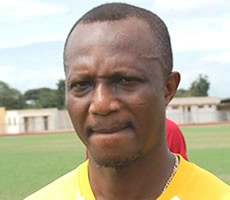 Head Coach of the national Under-23 team, Kwasi Appiah will today name his final 20-man squad for next month’s All Africa Games in Maputo.

The squad will be dominated by locally-based players who have been camping for the multi-sports event since the beginning of the month.

Speaking to JOY Sports’ Dennis Mirpuri, Coach Appiah disclosed what he said was his criteria to pick his final squad. He said, “I am looking at players who are tactically disciplined in terms of defending and then attack. The unfortunate situation we had was, as at last week most of our players, about eight of them had to leave for trials.”

The Black Meteors beat AshantiGold 3-2 in the final training match on Sunday, ahead of a camping exercise in South Africa.

Ghana are in Group B alongside defending champions Cameroon, Uganda and Senegal for the competition which starts on September 3.