Longtime talk-show host and former CNN interviewer Larry King is recovering in a hospital after undergoing a procedure to address chest pain, known medically as angina, Ora TV said in a statement.

He had been scheduled for an angioplasty but visited the hospital early last Thursday to be examined for the chest pain, said the statement, issued Monday.

“His doctor successfully performed the angioplasty and inserted stents to reopen the previous bypass from 1987,” the statement said. “He has been recuperating in the hospital and is scheduled to be released soon. His doctors expect him to make a full recovery.”

Ora TV, an on-demand digital TV network, said that contrary to some media reports King’s doctors say he did not have a heart attack and did not go into cardiac arrest.

“Larry is in good spirits and thanks everyone for their concern. He’s expected to be back to work on his shows, ‘Larry King Now’ and ‘PoliticKING with Larry King’ soon,” the statement said.

King, 85, has had several heart attacks, and in 1987 he underwent quintuple bypass surgery. His medical issues led him to establish the Larry King Cardiac Foundation, a non-profit dedicated to helping those who do not have health insurance afford medical care. 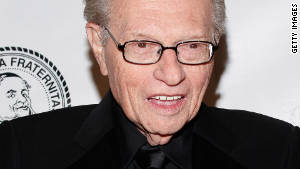 King began his long broadcasting career in the late 1950s as a radio deejay in Miami.

His TV interview show, “Larry King Live,” premiered on CNN in 1985. Over the course of more than 6,000 episodes, King interviewed presidential candidates, death row inmates, Hollywood stars and everyone in between — all while wearing his large eyeglasses and trademark suspenders — until his retirement in 2010.

He received a lifetime achievement award at the News and Documentary Emmy Awards in New York in 2011. King came out of retirement in 2012 to host “Larry King Now,” which premiered on Hulu and Ora TV. He currently hosts “Larry King Now” and “PoliticKING with Larry King.”

King was diagnosed with lung cancer in 2017 and underwent successful surgery to treat it.