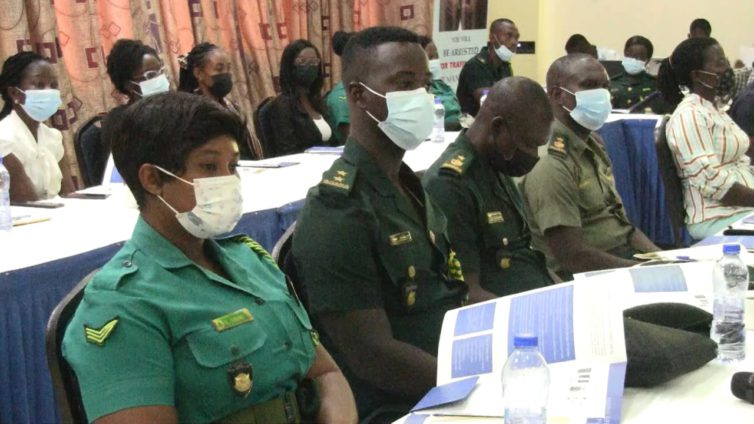 The Human Trafficking Secretariat (HTS) under the Ministry of Gender, Children & Social Protection (MoGCSP) in collaboration with Expertise France has organized a three-day training for officers from the various law enforcement agencies in the Western Region on combating human trafficking and irregular migration from 1st to 3rd November 2021.

A recent report by United Nations Office on Drugs and Crime indicates that Globally Human Trafficking is the second-largest trade and an organized crime.

The training is part of the implementation of the National Plan of Action for the elimination of Human Trafficking in Ghana, mandates the Ministry to support security agencies in regular capacity building programs on how to effectively identify victims of trafficking at the land borders, combatting human trafficking in general, victims’ protection and prosecution of offenders.

Also, as a recommendation in the 2021 Trafficking in Person report published by the US Department of labor in June 2021, the Human Trafficking Secretariat is to provide advanced training to law enforcement on surveillance and evidence collection on trafficking cases.

As such, the Ministry is organizing capacity building workshop for 65 officers from the Immigration, Police, Customs, EOCO, Social Welfare, Judicial Officers and the Attorney General’s Department to equip them to handle the root causes of trafficking since Ghana is a source, transit and destination country for human trafficking.

Head, Human Trafficking Secretariat, Ministry of Gender, Children and Social Protection Madam Abena Annobea Asare, in her opening remarks, said despite the outbreak of the COVID- 19 pandemic and the closure of borders, there are still human trafficking activities and illegal migration going on within the country.

“Traffickers have now devised new modus operandi to lure their victims, these victims are either forced, deceived or coerced for sexual exploitation, child labor or domestic servitude”. She said.

She added that the victims end up suffering all forms of abuse, living in poor conditions, and having acute health problems among others.

Madam Annoebea Asare, further explained that the workshop was important for the officers due to the frequent transfers, recruitments, and promotions in the various law enforcement agencies working on human trafficking and migrant smuggling.

She commended the tireless efforts and sacrifices of the officers in the fight against human trafficking which has contributed to Ghana maintaining their two ranks for four consecutive years in the 2021 Trafficking in-person report after being on the Tier two watch list four years ago.

Madam Annoebea Asare was optimistic that at the end of this three-day capacity-building workshop, the officers will have a better understanding and knowledge of Human Trafficking and victim identification which will increase the number of prosecutions.

“Currently there has been 12 prosecutions and almost 350 victims rescued by law enforcement officers”.

DISCLAIMER: The Views, Comments, Opinions, Contributions and Statements made by Readers and Contributors on this platform do not necessarily represent the views or policy of Multimedia Group Limited.
Tags:
Capacity building
Human trafficking
Irregular Migration
Law enforcement
Western Region