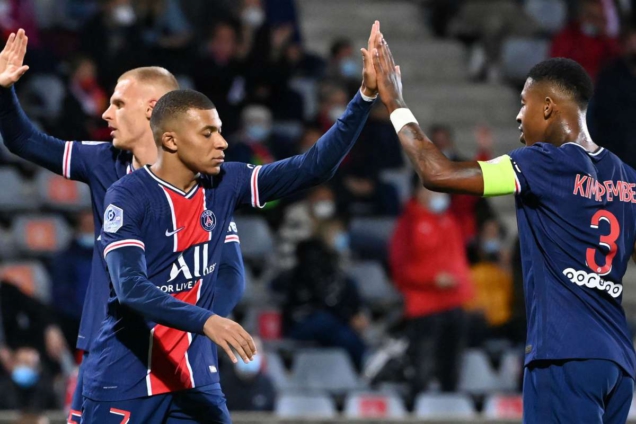 Ligue 1 will continue in France, despite the announcement of a new national lockdown by President Emmanuel Macron on Wednesday.

France has taken dramatic steps to curb the rapid growth of Covid-19 infections in the country in recent days, as more than 250,000 new cases were confirmed in the last week according to John Hopkins University, with non-essential business and services to be closed.

Unlike in the spring, however, when the 2019-20 campaign was arrested prematurely, much to the frustration of certain clubs, professional football will continue to be played, with Ligue 1 and Ligue 2 going ahead behind closed doors.

Minister for Sports Roxana Maracineanu explained on Wednesday: “The coming weeks will be tough economically but also on a human level. This is why I wanted to confirm to you this evening that the continuity of the sport that is practiced as a profession is assured.

The FFF (French FA) confirmed that third-tier football will also take place, as well as well as the top level of the women’s game and futsal, albeit behind closed doors.

Conversely, any football below that standard, including youth football, will be postponed until the current lockdown eases, something that is due to take place on December 1, depending on the evolution of the health situation.

The Coupe de France, which was due to see the sixth and seventh rounds played over the next five weeks, has been suspended. Professional clubs from Ligue 2 were due to enter the competition in the eighth round, which is slated for the weekend of December 12/13, although that may need to be rescheduled.

“The world of football my participate in the collective effort to fight against the second wave of this epidemic,” a press release from the FFF states.

Marseille’s Ligue 1 match with Lens, due for Friday, has already been postponed this weekend because of 11 members of the visiting side testing positive for Covid-19, while Grenoble’s Ligue 2 trip to Niort will also be played at a later date due to similar reasons.

DISCLAIMER: The Views, Comments, Opinions, Contributions and Statements made by Readers and Contributors on this platform do not necessarily represent the views or policy of Multimedia Group Limited.
Tags:
French Ligue 1
Ligue 1