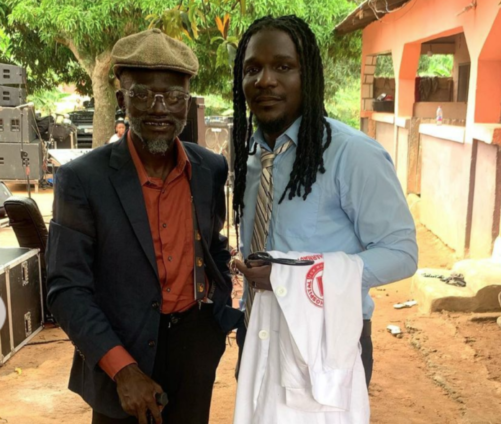 Fans and followers of Kumawood actor Lil Win are excited that he has settled his differences with his former manager, Zack GH.

Taking to Instagram, the actor, born Kwadwo Nkansah, posted a picture of himself and Zack on the set of his new series ‘Cocoa Season.”

In the caption Lil Win stated that he was working to bring people in the industry together with his series.

“Joining all forces of the industry – Veteran Actors, Renowned Actors, Most Influenced personality, Top streamed musician, news faces of TV. All in one pack #Cocoa_season [SIC],” he wrote.

Joining all forces of the industry Veteran Actors , Renowned Actors , Most Influenced personality , Top streamed Musician , New Faces of Tv All in One Pack #Cocoa_season You can’t miss the fun

The friendship between Lil Win and Zach hit the rocks when they parted ways after the actor set up his own record label, Weezy Empire.

“I have seen a padlock in the spiritual realm and your lips have been padlocked. The person is trying to keep you mute and I heard a name like Zack,” he prophesied.

Zack GH who seemed outraged by the prophecy threatened to sue the Prophet Nigel Gaisie.

Although many fans are unsure when they two settled their differences, they are happy Lil Win and Zack are working together again.

“Waoooow glad to see you and Zack again 😍😍😍😍😘💞🙏 onua d) ohh,” one fan commented under Lil Win’s post on Instagram.

“Peace I love this!!!… Can’t wait for this project tho 🔥🔥🔥,” Archipalago also wrote.