Referee has decided it is already in extratime. It is all Ghana. Passing the ball around teasing the defence

Game resumes after over 15 minutes break.

"The Ghana fans are marching out of the stadium – it is a sight to behold. There is a big plume of tear gas – the tear gas is spreading to the middle and up towards the back corner. The supporters are diving for cover. It's the clear the authorities have moved in with force. One fan has jumped over the wall and landed on an ambulance – that's a 20 foot drop."

The game has been stopped for a very long time. Black Stars huddled together at the middle of the pitch. The army and police have been called in. Helicopter flies over the pitch

82’ Fans amass at the end of the pitch. The game is stopped. This is getting disgraceful for the host. Bottles flying in. Ghana asking for the game to be called off.

75' Agyemang Badu comes on for Wakaso.

Fans took to twitter to jubilate. Robert Mugabe wasn't left out of the fun

74'Goal!!!!!!!!! Andre Ayew is in the right position to tuck away a Kwesi Appiah pass into the penalty box . Nicepass behind the defence by Atsu on the left. Kwesi Appiah latched on to it, beats Ovono to the ball, the keeper is out of position and Andre Ayew easy finish ends EG dream effectively.

73' Sipoto comes on for Salvador

72' Dangerous cross from Nsue from the right finds nobody in the box. Brimah has all the time to grab it

69' Foul on Kwesi Appiah on the left offensive area. Shirt-pulling. Freekick not well utilised. ANdre Ayew is enjoying himself

68' Yellow card flies out again against Afriyie Acquah and EG' s Edu. The number of  fouls are climbing up

67' What is hte keeper trying to do??? He is way out of his box rushing tho the left corner to deter Ghana attacker before he can do anything with the ball.

65' Poor referee decision inflicts Andre Ayew with a yellow. The ball was there to be won. And a sliding challenge by Ayew and EG player to get the ball gets the Ghana captain booked.

58’ A striker Bosio comes on for Vazquez

57’ Kwesi Appiah could not get the ball past Ovono in another one-on-one situation. The keepers body blocks the flick

55' OMG!! Andre Ayew header inside the box bounces off wide to the left. He was in such a goal scoring range

54' Afriyie Acquah clutches his heel on the pitch after he is brought down.

52' Ghana turn a poor freekick into a dangerous counter attack. The ball switches to the left flank to Wakaso he flicks the ball into open space hoing Kwesi or Jordan can read him. They can't. Nice attack ends in disappointment

50'Good build up involving by EG to win a corner.  EG fans and players alike need to calm down. No extra points for anger and frustration doesn't score goals 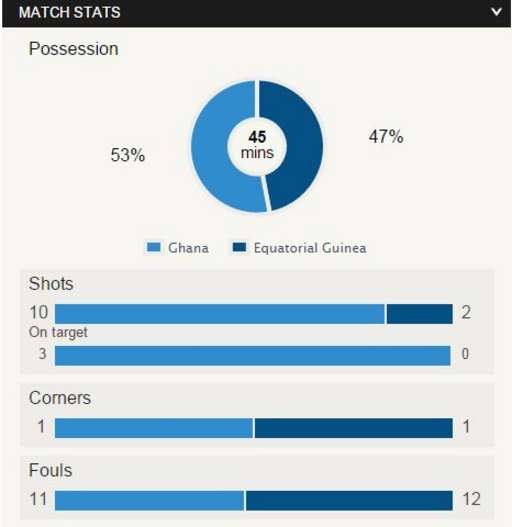 45' A reported $1m winning bonus for each EG player is getting to them. Money is slipping through their hands. A violent crowd throwing bottles at the Black Stars.

44' Goal!!!!!!!!!Wakaso scores after a delightful attacking move. Three-man attack rushing through the EG defence. Atsu splits through the defence on the left. Cuts back a pass to find Wakaso in a one-on-one situation with the keeper. He keeps his cool to slot home!!!!!!

44' EG growing uncontrollable. Putting pressure on the referee to flash out a card whenever a player succumbs on the pitch.

43' Jordan Ayew scores with low shot to the right.

40' Ovono is judged to have brough down Kwesi Appiah. Referee whistles for a penalty

36' Vaquez attract a yellow card after pulling on Rahmann's shirt on the edge of the left corner. The freekick not very dangerous.

33' EG will be lucky to end the game with 11 players. They are very aggressive, surrounding the referee after very little incident that goes against them.

31' Nsue volley inside the penalty box, runs into the arms of Brimah.

29' Wakaso drags his shot outside the box wide. Close but wide. First real shot at goal.

24’ The game is getting very emotional and physical especially for EG point of view. Home pressure could get to them than help them.

22’ Edu is livid at the referee for preventing him from continuing after pushing Wakaso off the ball inside the offensive area. Will the referee punish his rant?

20' Kwesi Appiah releases a through ball cutting the defence. Jordan runs through to meet the keeper but the pass is a little too heavy. Ovono grabs it easily.

18' Nsue punches the ground in frustration after failing to get on to the end of a cross after a freekick. EG player and coach demanding for a card to Wakaso after a slight incident. Wakaso is yellow carded.

16' Baba Rahaman goes down to a strong challenge after Ayew tried to find him on the left inside the offensive area.

13' Two offisde decisions against Ghana in the space of two minutes.

10' Good Afful cross in could not really get utilised by Kwesi Appiah insdie the box and it rolls over for a goal kick. Ayew is battling the midfield in typical fashion.

8’ Good defending to block Ayews shot inside the box on the left. Wakaso through-ball found him in a juicy position

7’ Danger for the Black Stars after a four-man attack sweeps through the defence. Balboa volley after a cross from the right is over hit. The home support roars into such intimidating force.

4' Atsu is ruled offside on the right. Nervous beginings for EG.

2’ Early freekick for Ghana. Wakaso forces a punch from goalkeeper Ovono from a very long range.

Ghana is eyeing an appearance at the 2015 AFCON final and hopefully win the tropy for the fifth time after a 32-year wait. But the looming figure of Equatorial Guinea, a team transformed by home support into a real threat stands in the way of the Black Stars.

Ghana captain Asamoah Gyan is an injury doubt following his collision with Guinea goalkeeper Naby Yattara that left the striker with a hip problem.

Crystal Palace striker Kwesi Appiah, who scored in the 3-0 victory over Guinea, could replace Gyan.

Equatorial Guinea will again look to striker Javier Balboa to provide the goals, following his double that saw off Tunisia in their quarter-final.

However, he said: "I am the reference for the public, but it's a team job."

Gabon referee Eric Otogo will be in the spotlight after controversial scenes marred Equatorial Guinea's last-eight tie with Tunisia.

A controversial penalty decision in the dying minutes by Mauritian referee Rajindraparsad Seechurn turned the tide in favour of Equatorial Guinea against Tunisia.

Javier Balboa converted the harshly awarded spot-kick and he scored again in extra-time to give the host nation a shock 2-1 victory.

Seechurn has since been suspended for six months for what the Confederation of Africa Football described as a "poor performance".

This will be Ghana's fifth consecutive semi-final, while the Nations Lightning are in the last four for the first time.

If the host nation's passage to the semi-final was controversial, the Black Stars' qualification was most convincing as they dumped Guinea 3-0.

Four-time winners Ghana have improved since an opening-match 2-1 loss to Senegal by beating Algeria, South Africa and Guinea.

Equatorial Guinea are unhappy having to move to Malabo for the game from their fortress in Bata, where they have not lost an international game.

Three years ago, it was in Malabo that they were thumped 3-0 by the Ivory Coast in the quarter-finals.

Balboa will again be the source of inspiration for the team. He has stood out with his maturity and class.

Goalkeeper Felipe Ovono, who features in the semi-professional Equatoguinean league, has also caught the eye and is one of the reasons his country are still in this tournament.

"It will be difficult to win the Cup of Nations, but I pray to still win it," said Argentine coach Esteban Becker, who led Equatorial Guinea to the 2012