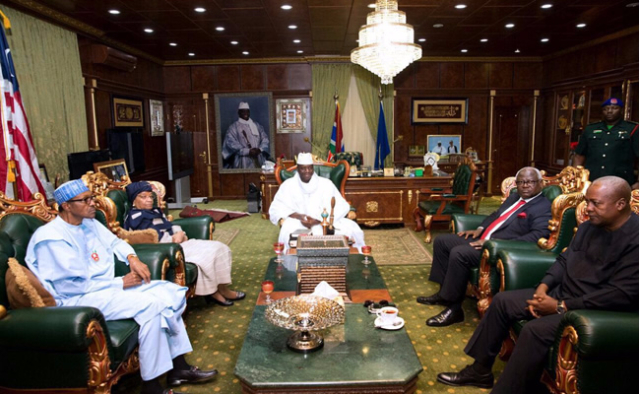 A number of African leaders including President John Mahama are in Gambia as ECOWAS initiates efforts to get that country’s President Yahya Jammeh to step down after losing the elections.

Jammeh at 29  took over the reins of power in 1994 in a bloodless coup d'etat which removed Dawda Jawara from office.

Seen as a dictator, Jammeh has been in office for 22 years after winning three separate elections.

His fourth attempt at the presidency was foiled by Adama Barrow who defeated him in the 2016 election.

President Yahya Jammeh conceded defeat December 2, 2016 but made a u-turn several days later claiming there were massive irregularities in the elections.

He has refused to handover power to the president elect.

Gambian military officers have since taken over the Electoral Commission Head Quarters even as West African leaders attempt to broker peace and convince him to accept defeat and step down.

Ghana's president, John Mahama whose second term bid was thwarted in an electoral defeat to the opposition Leader Nana Akufo-Addo, is part of the delegation convincing Jammeh to follow his footsteps and step down peacefully.

They have been locked up in series of meeting sweating to convince the Gambian leader to step down.

Deputy Foreign Minister Emmanuel Bombande who was part of the Ghana delegation told Joy News nothing much has been achieved from the initial meeting with Jammeh.

"The whole day there have been several stakeholder engagement and meetings" involving the Jammeh, the president elect, Barrow, opposition leaders, security chiefs.

He said all these are expected to re-engage the outgoing president to accept defeat and relinquish power.

No concrete decisions have been made just yet but ECOWAS is considering military intervention if diplomatic efforts fail to yield any results, BBC reports a senior official of regional bloc Ecowas, Marcel de Souza, as saying.