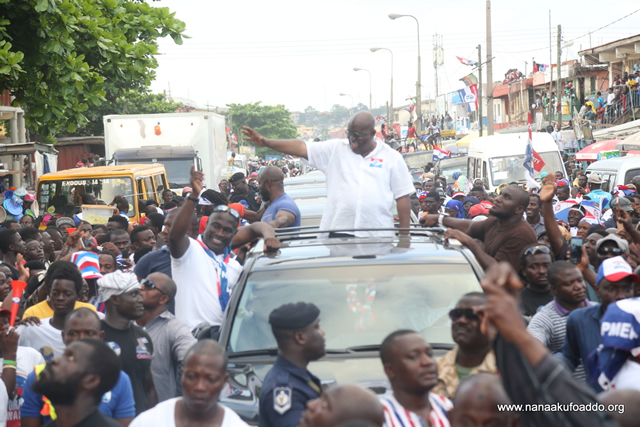 The flagbearer of the New Patriotic Party says president John Mahama remains the biggest threat to the future of the country and must be voted out of office.

Nana Akufo-Addo told students of Pentecost University during his campaign tour of the Greater Accra Region that four more years of Mahama will be an unimaginable disaster.

According to him, the country has seen the slowest rate of growth in the economy in 22 years, a record that does not bode well for an economy with oil.

This Akufo-Addo insists is unacceptable.

"When people come to speak to you, they talk about the future because you are the future. But I am going to say something a little bit different. Every year since John Mahama became president, our economy has shrank. This year we are going to have the slowest rate of growth in our economy in 22 years.

"What it means is that your ability to walk out of here and get a job is being compromised right now.

"Four more years of John Mahama will mean you have no future to look up to. So the responsibility for you is that together we will make sure that the threat to our future which Mahama represents will be removed forever," he stated.

The former Trade Minister Alan Kyeremanten who was part of the campaign tour said the issue of unemployment and the growth of businesses remain the biggest problems facing Ghanaians.

"There is only one party in this country that has shown by its record in government and also by its vision that they can address these two challenges," he stated

He urged the students to vote for Nana Akufo-Addo, the MP for the area, Shirley Ayorkor Botchway to define their future.

The NPP campaign team is expected to spend more time in the Greater Accra Region due to voter population in the region.