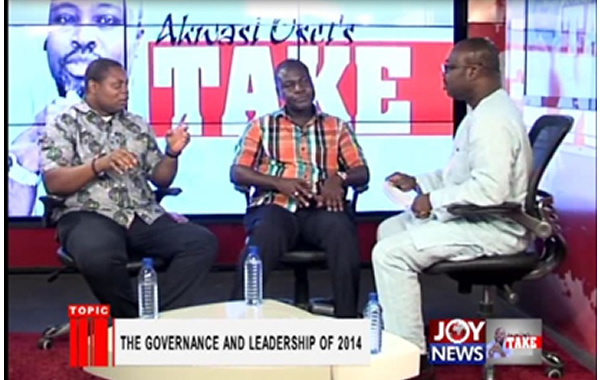 Founder and President of IMANI Ghana, Franklin Cudjoe says the presidency has become a den for making strategic deals that do not benefit society.

Describing the Mahama government as the most corrupt in the country's history, he said 23 oil contracts have been signed by the Government, with only seven fast-tracked through parliament “in a lightening manner like [that of a]highway robbery”.

He was in a conversation with Prof. Alex Dodoo, a clinical Pharmacologist and Associate Professor at the University of Ghana Medical school and Dr Akwasi Osei, a Professor of History, Philosophy and Political Science at Delaware State University in the United States of America.

They spoke on Akwasi Osei’s Take, a Multi TV programme on the topic: The Governance and Leadership of 2014.

Prof. Dodoo added that the presidency doesn’t seem to trust the competence of experts who would help in striking transparent deals.

On healthcare, the Professor stated that that the country currently doesn’t meet the demands of the growing population, and reminded that healthcare is not a privilege but a right, enshrined in the constitution.

“There are too many committees with too many recommendations and we go back to sleep on the issues with no preparedness for crisis. Ebola was a key example with woefully inadequate preparation to contain the situation,” he stated.

Speaking on the cholera epidemic that hit the country in 2014, Mr Cudjoe said the country was facing a situation of policy incoherence and misplaced priority.

He stated that 41 million cedis accrued from the oil revenue was disbursed from the Office of the Chief of Staff and was wasted. This, according to him, could have been used in tackling sanitation.

He however commended the Vice President’s effort at tackling sanitation.

On misappropriation of public funds, Mr Cudjoe pointed out that the country would have saved close to 250 million dollars if it had synchronised its biometric identity collation agencies. These monies could have been used to build classroom blocks to end the episode of schools under trees and also help improve sanitation and tackle cholera this year to avoid the needless deaths.

On the National Economic Forum held at Senchi in the Eastern region last year, Prof. Dodoo stressed that Ghana has enough human resource but too many square pegs in round holes who do not drive policy.

He added that most of the politicians are just talking and have no commitment to good governance, and that the Senchi consensus will only be a success story if technocrats are given the upper hand to implement policies.

The IMANI Boss expects more cases of corruption this year and accused the Mahama Administration as the most corrupt in history.

He described the situation as a leadership paralysis with the centre clearly not holding.

“Why do we allow the structures to be circumvented in the first place? National service was a calculated grand scam. SADA … why spend money to cut trees to grow nonexistent trees? It runs parallel to the northern regional establishment. It was a clear avenue for corruption,” he lamented.

On the BOG policy to stabilise the cedi against the dollar, the Prof. said any country that introduces such currency restrictions is up for trouble and predicted that the cedi will fall faster.

The whole rationale behind it, in his view, was wrong, adding that people are now keeping their monies outside the banks.

Discussing the IMF bailout, Alex Dodoo accused leadership for not being financially prudent and accused the government of worsening the country's financial crisis.

The Prof. Ewurama Addy Commitee on Emoluments, according to Franklin Cudjoe did a shoddy job on the wage bill.

According to him, the people who benefitted the most are the Legislature, the Executive and the Judiciary with payments of ex-gratia.