Masjid Hedaya inaugurated at Gbanyamni in the Northern Region - MyJoyOnline.com

Masjid Hedaya inaugurated at Gbanyamni in the Northern Region 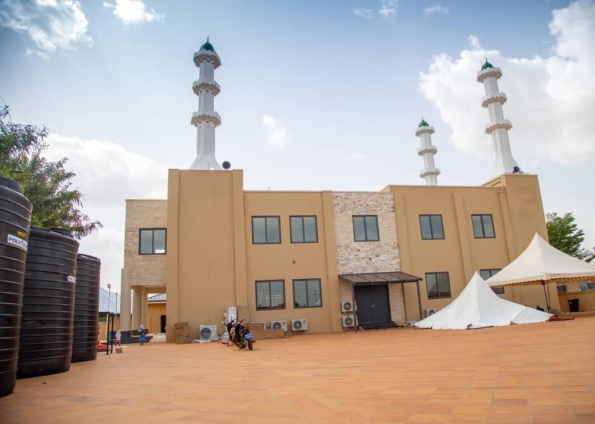 An ultra-modern mosque, Masjid Hedaya has been inaugurated for the Muslim community in Gbanyamni in the Northern Region.

The mosque is aimed to provide lasting and sustainable facilities, including an educational centre known as the Darul Hedaya Islamic School for the local community.

According to Sheikh Ibrahim Afa-zie, who is the Vice Chairman of the Darul Hedaya Islamic School, mosques have become a cornerstone of worship in Islam and they unite communities.

As such, the provision of the mosque is welcoming and a good news for the Muslims in Gbanyamni.

“When you step foot in a Mosque, you have the opportunity to join together with your Islamic community to receive the many blessings of communal worship and Islamic education. We can celebrate our faith together or mourn the loss of loved ones, find strength in our Lord through prayer or seek council on Islamic matters. It is our home away from home.”

He entreated Muslims to be tolerant and live peacefully with each other and follow the Islamic teachings on peace.

Also present at the inauguration were Chief Imams, Sheikhs and other Islamic Scholars.

According to one of the speakers, mosques throughout Islamic history as an institution played a central role in cultural and social life.

“The mosque acted as a focal point of all activities based on the importance bestowed upon it by the Prophet Muhammad during his lifetime and the life of his companions thereafter. The distinctiveness of the mosque is linked directly to the worldview of Islam.”

On the importance of the building of the mosque, the Northern Regional Chief Imam said that “worshipers are to feel satisfaction, attain tranquillity, acquire mercy and devotion, and release daily worries.

“People are encouraged to interact with one another on the basis of love, equality, cooperation, and by seeking Allah’s pleasure. Every worshiper attempts to eliminate the selfishness that isolates him or her from others and to reach a level of harmony with the rest of society.”