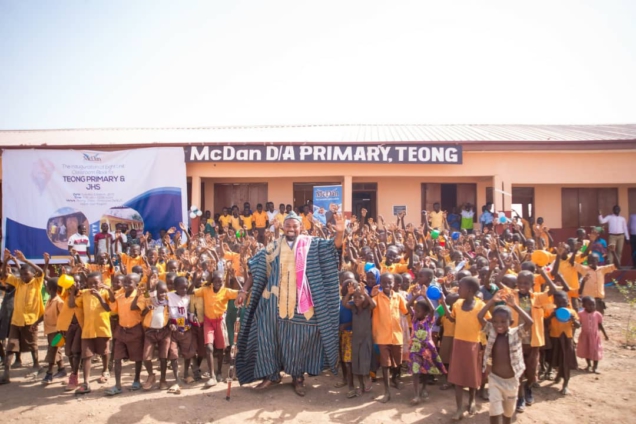 “I want to be remembered not for the money I made but for the impact I made and how many lives I touched” – Daniel Mckorley.

These words have echoed in many interviews and public speeches by the founder of the McDan Foundation who is also the Executive Chairman of the McDan Group. Being a successful businessman with firm roots in the logistics industry, Dr Daniel McKorley has, over the years, earned massive recognition internationally for his achievements in business practice and entrepreneurship.

Social responsibility and community impact projects have been a key part of the McDan Group’s operation over the years and these are executed solely by the McDan Foundation. The areas of focus include education, sports, agriculture, entrepreneurship and health.

The relationship with Northern Ghana had always existed because of the founder’s strong relationships with some families in the north. It hit a high point when Dr Daniel McKorley was enskined Gub Gbanaa of the Tamale traditional area by the then overlord Na Alhassan Dawuni of blessed memory. Traditionally he served as one of the sub chiefs for mobilization, peace and development under the Dakpema Skin of the Northern Regional capital.

Before this historic enskinment, the foundation had done many social interventions, in some communities in the north.

Many of the people saw this as an opportunity to grow a bond with the McDan Foundation which was already laying foundations in many areas including education,

A news item, on Accra-based television station, GHOne drew the Foundation’s attention to the plight of the Teon Primary school in the Timpani District of the Upper East Region. It was made of laterite and had a roof that could hardly stay intact, leaving the school children at the mercy of any sudden bad weather. They hardly had any seats and always resorted to sitting or lying on the floor to write.

The inauguration of the school was held on March 5, 2019 and was marked with a grand durbar headlined by the Chief of the area Naaba Dazure II.

While the excitement was visible on the faces of children, the adults expressed relief because it had eased their daily troubles of having their children walk 10 miles to attend school.

By the inauguration, the school was already overbooked, as surrounding towns and villages were all eager to attend the school – a clear sign that replicating this gesture in many more communities in Northern Ghana is the way to go. The commitment of the founder of the McDan Foundation to supporting the children is clear, as indications are that there will be more of such infrastructure to support other communities.

For this gesture extended to the Chief of the Town enskinned Dr Mckorley a sub chief under the skin name Na Piini. The chief later explained that his people see the foundation as a friend and ally in development, making it necessary to involve its founder in the town’s main chamber of decision making to help rapid development. At the recent Damba Festival in Yendi, the McDan Foundation with the blessing of the overlord, Yaa Naa Abukari Mahama, cut the sod for the construction of another school. It is expected that the edifice will be inaugurated and handed over to the chiefs and people soon.

The Foundation has undertaken several social intervention projects including training of women in shea butter processing, the regular support of the Tamale Teaching Hospital as well as social projects of some chiefs.

The McDan Foundation is known for its massive support for sports development especially tennis. The McDan Open tournament which started some six years ago has now gained ITF certification and attracts players from all over the world.

The foundation also has a plan to develop the sport of boxing in Northern Ghana and this led to the organization of the McDan Amateur Boxing Independence Day Edition on March 6, 2019.  The event held at the Jubilee Park, in Tamale was part of activities marking the maiden Independence Parade to be held outside Ghana’s Capital Accra. The McDan Amateur Boxing Series will be a regular feature on the calendar in the Northern Regional capital and expected to be spread across the regions. In December 2017, the foundation was key in supporting the renaming of the Tamale Stadium to Aliu Mahama Sports Stadium, to honour the memory of Ghana’s deceased former Vice President Alhaji Aliu Mahama.

Coincidentally, the winner of the maiden edition of the McDan Entrepreneurial Challenge Alhassan Koligu of Alkoh Shea Butter who won a prize of $100,000 is a native of Gambaga in the Northern Region.   The prize will not only help him expand his business in his hometown, but will have a big positive ripple effect on the local economy and will impact many lives who operate on the value chain of shea butter production in his area.

The McDan Foundation’s commitment to impacting lives in many other places in Ghana including the North is unwavering and its continuity will be needed greatly to keep the smiles on many faces.