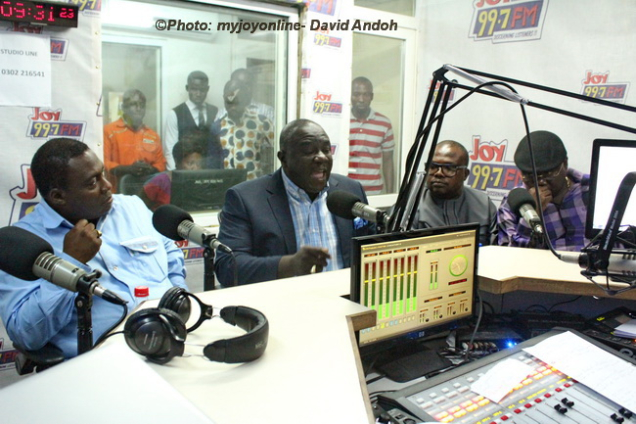 Members of the Committee that planned Ghana’s participation in the 2014 World Cup finals in Brazil Tuesday appeared on Joy FM studios to deny reports that they received kickbacks E-Volution, the company that was awarded the contract to organize viewing centres for football fans.

Manasseh Azure Awuni who has been investigating this deal reports that, three separate internal payment vouchers in the possession of Joy News indicate E-Volution International’s approval for payment of GhÈ¼100, 000 to former Youth and Sports Minister, Elvis Afriyie-Ankrah as “production cost”.

But speaking on the Super Morning Show Tuesday, December 23, 2014, Chairman for the 2014 World Cup Operations Committee, Joel Nettey strongly denied receiving any such money from the events company for such purpose.

“It looks dirty, to be honest with you, and I’m not happy about it…It’s particularly irritating that a thing like this will happen that will ruin my reputation,” a furious Joel Nettey told host of the Show, Kojo Yankson.

The Chairman led his colleague members into the studios of Joy FM with the “mission to clear his name” and that of the committee on the claims that “monies were paid to them as honorarium”. Other members of the committee who accompanied Mr. Nettey were Kojo Adu-Asare, Horace Ankrah, Lary Acheampong and Kwesi Taylor.

The Committee chair called for investigations into the matter so that the appropriate actions are taken.

“Let whoever it is, who is purported to have received money on behalf of anybody come up and speak up…because we are not going to go down on this. Never!”

Earlier on the programme, former Youth and Sports Minister Elvis Afriyie-Ankrah who said he was “advised” by the GNPC to work with E-volution, also denied taking the money “for any purpose”.

He said he was prepared to avail himself for any further investigative procedure to clear his name of “all this world cup brouhaha once and for all”.

Mr. Afriyie-Ankrah, now a Minister of State at the Presidency, suspects the allegation might be part of a hatched plot to dent his political prospects because, some persons have tipped him to become a future vice president or possibly president of the country.

But he told Kojo Yankson it is time for all such plots to end because he has no such ambitions.

“If all this is about the so-called ambitions; please leave me alone! I never dreamt of being where I am today. Where I am today is almost by accident”.

According to him: “I don’t have any grandeurs or ambitions…I’m no threat to anybody. No man no woman or devil can stop God for achieving the purpose for my life”.