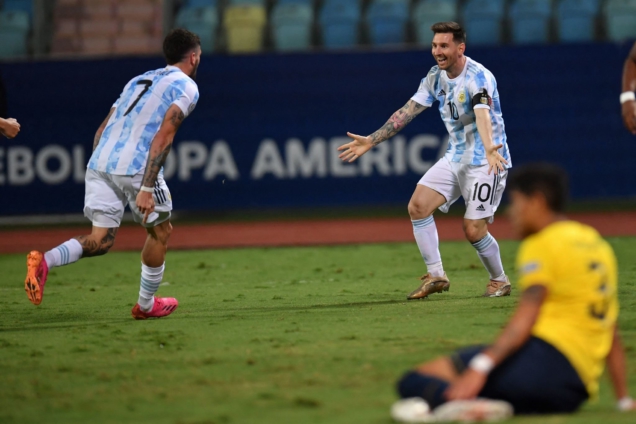 Lionel Messi scored a free-kick and set up two goals to inspire Argentina to a 3-0 win over Ecuador and set up a Copa America semi-final against Colombia.

The 34-year-old forward provided assists for Rodrigo de Paul after 41 minutes and Lautaro Martinez late on.

He then curled in a free-kick in injury time after Piero Hincapie was sent off for a foul on Angel di Maria.

“I’ve always said that individual prizes are secondary – we’re here for something else,” said Messi, whose goal was his 76th for his country. “We have an objective and we’re focused on that.”

Messi, who is a free agent after his contract with Barcelona ran out, could have given his side the lead early on but hit the post with a shot when through on goal.

He added: “It was a hard match. We know how difficult an opponent they can be. The important thing is we’ve taken another step forward.”

Argentina, who have not won the Copa America since 1993, face Colombia, whose only win in the tournament came in 2001, at 02:00 BST on Wednesday.

Former Arsenal keeper David Ospina was Colombia’s hero after he saved penalties from Jose Maria Gimenez and Matias Vina in the penalty shootout.

Ospina, 32, was making his 112th international appearance, becoming his country’s most capped player.

“He’s very cerebral when it comes to penalties. That’s a big help to our team.”