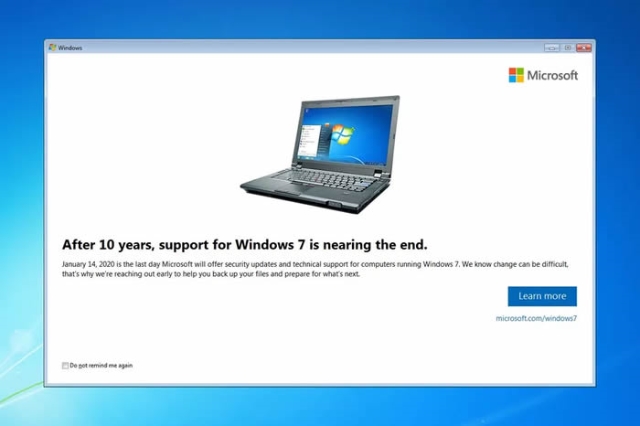 Microsoft has started rolling out an update to Windows 7 that will notify existing users about the end of the support.

The software maker is stopping support of Windows 7 on January 14th, 2020, and it’s now starting to warn about this cutoff date. Microsoft is using a notification to warn Windows 7 users, similar to the prompts the company used to get people to upgrade to Windows 7.

Microsoft revealed earlier this month that these notifications would arrive on Windows 7, but the company says it will only be displayed a “handful” of times during 2019. The notifications will stop once Windows 7 support ends in January, or if you select “do not remind again” on the notification. Microsoft’s previous Windows 10 upgrade notifications irritated a number of Windows users, and the company has clearly learned to respect that people want to hide them.

Windows 10 is still edging closer to Microsoft’s goal of having it installed on 1 billion devices.

The Windows 7 upgrade cycle will help push Windows 10 further, and it recently passed Windows 7 in market share earlier this year. Windows 10 is now running on more than 800 million devices.