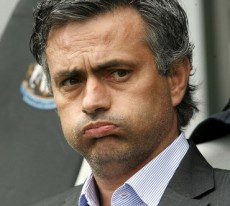 Jose Mourinho is annoyed that private, light-hearted comments about Chelsea's striking options have been made public, Press Association Sport understands.

The Blues manager was filmed by French television station Canal Plus in conversation with a Swiss businessman at a recent sponsor's event.

The recording, aired on Monday, shows Mourinho commenting on the Blues' lack of depth up front and questioning the age of Cameroon forward Samuel Eto'o.

Such comments have made many headlines and are understood to have irritated Mourinho, who did not know the light-hearted exchange was being filmed.

Canal Plus captured the footage as they were waiting to conduct a one-on-one interview with the Chelsea boss, who was also filmed addressing the possibility of signing reported long-time target Radamel Falcao from Monaco.

"I need a striker, Falcao needs a club," Mourinho is reported to have said.

"A player like him cannot play in front of 3,000 people. Monaco is a club to end (your career with)."

The furore surround the leaked footage is hardly the ideal preparation for Chelsea's Champions League last-16 first-leg clash at Galatasaray, ahead of which Mourinho will speak to the media in a pre-match press conference on Tuesday afternoon.

The Blues take on Roberto Mancini's side on Wednesday in Istanbul, where Chelsea will face the man who scored the European Cup-winning penalty in 2012, Didier Drogba.