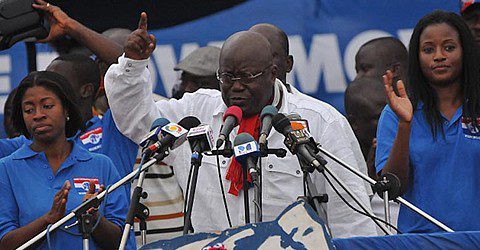 Whenever a man is sent for a divine mission with a divine mandate, it is important not only to trace the roots of such mission but also examine what was happening at the commencement of such mission. Ghanaians who care to think back deeply should be sincere enough to see a clear and unstoppable divine signs and backings propelling the NPP’s presidential candidate for 7th December, 2012 Elections.

In the first instance we must not fail to appreciate the name “Nana Addo Danquah Akuffo Addo” a man of valour which Ghana needs most now to wake the nation from deep slumber and sleep after three years six months of misrule by the unprecedented bitter Ghana campaigner who has woefully failed to fulfill his sweet promises made to Ghanaians during the 2008 elections that is still itching and yearning to have a second term in the upcoming 7th December, 2012 general elections. It is worrisome that since 2008 elections NDC has been in power with no concrete development or positive changes in the country as a whole.

I strongly believe that God has been watching the insincerity and wickedness of some selfish politicians who have impoverished this country since independence and has listened to the cry and suffering of poor Ghanaians and has decided to bring a change for good.

The most unfortunate thing about some political leaders is that they do not have sympathy for the Ghanaian electorates who wasted their precious time standing in the hot sun and rain to vote them to power. The same set of politicians who have put this blessed country in a total mess have taken several shots at power and are still planning to retain power to plunge Ghana into more gargantuan problems. They have repeatedly being in power without any positive impact on the life of the poor and suffering Ghanaians who cannot afford a square meal.

God has now given us a man on a divine mission who will take us to the promise land. The man with a divine mission has promised Ghanaians when he is voted into power because he understands democracy will give back to the Ghanaian electorate power. He has said in his campaign he will not offer his beloved Ghanaians empty promises or unachievable promises he himself knows he cannot fulfill. He believes in what Socrates said “If you promise you must keep your promises” that is why he has come out openly to promise all Ghanaians both rich and poor that his divine mission is to give free education to every senior High school child to reduce the burden of parents. It is surprising to hear from some selfish politicians who once benefited from Dr .Kwame Nkrumah’s free education programme coming out to throw dust into the eyes of Ghanaians that Nana Akuffo Addo’s God-sent vision is not feasible. For example let us check out President Barrack Obama’s campaign slogan in America was ‘we can do it’. Here, the slogan of the NDC is the opposite. It‘s a pity that the party has failed the masses. It‘s only the innocent people who are suffering in Ghana. Look at the Kumasi – Accra Expressway, it is a shame that countless lives are lost on the route due to the bad nature of the road.

Nothing is impossible in this life except people who have no vision for the future generation. Throughout my secondary school education from Antoa Secondary School in 1985-1987 and 1987-1990 in Juaben Secondary School it was government scholarship that saw me through my secondary school education to the extent that I had the opportunity to go to the accounts office for some money to buy provisions and books and the rest was used as my pocket money. The unbelief politicians will surely live to see Nana Addo’s free education dream for all Ghanaian school going child at the Senior High School come through. It is only a politician who can dream big that will see Nana Addo’s vision as feasible. Nana’s free senior High School education is feasible even the Ugandans whose God’s gift resources are nowhere near our natural resources could offer free education to the good citizens of Uganda with their huge population.

No wonder the same doubting Thomas’s who were saying the National Health Insurance policy by the Kuffour’s administration was not feasible became beneficiaries and tomorrow their children’s children will bear the fruits of Nana Addo Danquah Akuffo Addo and NPP’S free SHS education vision. Nana Addo Danquah Akuffo Addo believes in human resource development that is why his main priority is to offer free SHS education to all Ghanaians. Martin Luther king gave the Americans a revelation and he did not live to see a black man in the person of Barrack Obama becoming the president of USA. Ghana needs a man with vision who foresees good things that will happen not only today but what his vision has in store for the young generation and children not yet born.

Nana Addo Danquah Akuffo Addo is a devout Christian who has the fear of God in him. He does not start what he can’t finish. God has really done wonderfully well for him in life and does not need more houses any longer, he has had enough. He is contented with what he has in life and is against people who are looting the tax payers’ money and he knows one day, nemesis will catch up with them. Nana Addo Danquah Akuffo Addo went into politics with all sincerity and has gotten a name to preserve. So in his own case, any promise he will make now, please quote him, he will definitely fulfill. He is one politician Ghanaians can not mention his name when it comes to issues of corruption and looting the nation’s money and wealth to enrich himself and his family. He is a compassionate person who has the plight of the common man at heart. He is one politician people in the NDC have been insulting and making false accusations all the time and has not reacted to any single insult or these false accusations and yet these same people have tagged him as an arrogant person. This is unbelievable and where in this world would you insult and give false accusations about an arrogant person and he will not react? He has proven beyond all reasonable doubt that he is a nice gentleman and a leader who is ready to accommodate all the filthy things that will come his way.

He is a visionary who thinks about fixing the worst and bitter Ghana economy we now have that is why he has a technocrat in the person of Dr Mahamudu Bawumia as his vice who has a very good track record and has all it takes to assist Nana Addo Danquah Akuffo Addo bring Ghana’s worst and bitter economy to its rightful place to bring hope to all suffering Ghanaians. There is a wise saying that “you cannot give what you do not have” From the actions or behaviour of Nana Addo Danquah Akuffo Addo, we have seen that he is a man for all, irrespective of tribes and religions. It is clear to all Ghanaians that he should be allowed a shot at the presidency of this nation for once after 55years of independence.

Besides, if we trace the track record of Nana Addo Danquah Akuffo Addo, through his good vision of bringing mobitel which is known today as Tigo which has given majority of Ghanaians easy access to communication. His good vision brought about freedom of the press and today pressmen and presswomen can discharge their duties without fear or favour. He has never been found wanting in terms of corruption and foul play. Rather he has maintained an impeccable and transparent character in leadership roles he had served in former president John Agyekum Kufuor’s administration.

I think Ghana now needs a leader who will be ready to fight corruption at zero level and not those leaders who instead of making sure corrupt characters are made to face full rigours of the law are rather rewarded and celebrated. I think Ghanaians must identify themselves with Nana Addo Danquah Akuffo as the right man to lead the nation to bring the nation back on track. We all should be vigilant enough now to end the era of leadership by deceit , corruption and propaganda whereby the country’s resources are placed in the hands of less than one percent of the population, who have continued to hold about 95 percent of Ghanaians to ransom.

Enough is enough for leadership kwashiorkor, paralysis and mediocrity in Ghana. The divine mandate is meant to bring drastic transformation from 7th December, 2012. We all must shun tribal and religious sentiments and vote for a new and better Ghana. Some politicians have deceived us a lot and we are fed up. Nobody can say no to Nana Addo Danquah Akuffo Addo come December 7th 2012 elections. Ghana will speak because GHANA in simple term is God has approved Nana Addo. Long live Nana Addo Danquah Akuffo Addo long live NPP fraternity.