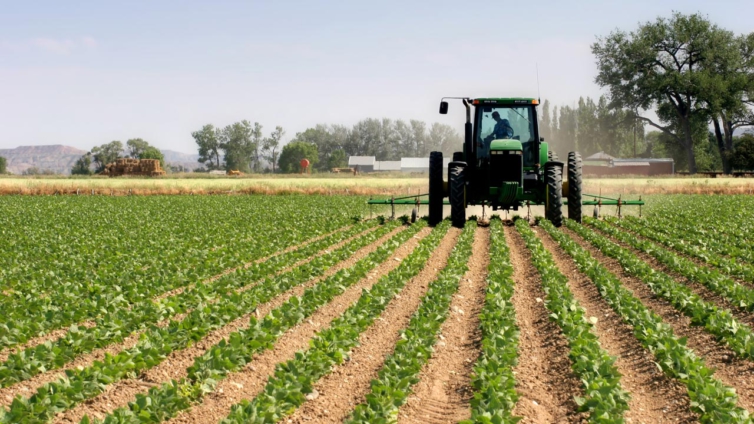 During the COVID lockdown period, it became obvious that there’s a delink between food production centres (supply points) and food consumption centres (demand). Food insecurity in urban centres became heightened leading to some level of social insecurity. Even after the lockdown, food availability in city centres is still inadequate for a number of reasons including an inherent fear of infection by suppliers to urban centres and the seasonal low supplies of main staples at this time of the farming calendar.

These low supplies will continue after COVID-19 for food imports including rice from Asia which contributes to 60% of national needs and meat products from Brazil and Eastern Europe due to protectionists measures likely to be adopted by producing countries whose national food securities would have affected by the pandemic.

In the past 3 years’ data from MOFA show that Ghana has been self-sufficient in local staples including roots and tubers and vegetables Thus the challenge is not necessarily food production (supply) but food distribution (access). However, to sustain farmers interest in increasing food production, they will have to be assured of a market; a confirmation of my proposition that “increased agriculture production is a function of market availability”

The purpose of this proposal is therefore to explore opportunities to sustain current food production levels resulting from PFJ interventions by enhancing real demand through a reduction of the physical and virtual distance between food production and consumption centres. The discussion will focus on three post-production links of the commodity value chains to sustain market opportunities and subsequently increased incomes for farmers to sustain their interest and capability in the application of improved production methods for increased productivity and subsequent sustained national food self- sufficiency in local staples The objective is two-fold

Traditionally food distribution has been managed by the private sector mainly by three major operatives’ i.e. aggregators, transporters and retailers. Though Government has the National Buffer Stock Company (NABCO) which manages public sector warehousing for grains and legumes, there’s no denying the fact that most food distribution (especially roots tubers and vegetables-cassava, plantain, yams) is done by the private sector comprising mostly women who often aggregate from farmers and send them to market centers for sale to retailers for onward distribution to consumers in city centers.

On the other hand, women aggregators in the private sector do not have access to storage and haulage facilities thus reducing their ability to influence the demand required to encourage farmers increase production. Their modus operandi have been to aggregate from a number of farm families and head cart them (or use tricycles) to sides of main highways to look for transport often (Kia trucks) to bring them to urban centers to sell to retailers for onward sale to consumers.

Often the retailers buy on credit making the payment only after the sale of produce, a situation which reduces the ability of the aggregators to make expected quick turn-overs by holding an investment in abeyance and at the mercy of the retailers. This often has a rebound effect on farmers who also have to sell their food on credit to the aggregator who depending on the location of the farm often is a monopoly and seen as a benefactor by the farmers. A study I once undertook showed that quite often aggregators defaulted in payment making farmers the ultimate losers.  The negative rebound effect also implies farmers do not receive timely returns on their investment thus reducing their production capabilities.

Coupled with this dilemma is the high operational costs which lead the aggregators who often operate on shoe-string capitals to offer the least possible prices to farmers, a further disincentive to farmers who based on the low return on investment have no option but to either reduce farm sizes or return to subsistence farming. The combined effects of poor aggregation and haulage capacities coupled with lack of storage facilities and pack houses for vegetables contribute to increasing both the physical and virtual distance between food producers and consumers a situation which does not support the transformation of Ghana agriculture from subsistence to market oriented economically viable businesses.

Reduction of distance between production and consuming centres.
Government through the Planting for Food and Jobs has succeeded in helping farmers increase their production levels these past 3years. I believe the next level of support to modernize agriculture is to transform the excess food into cash by creating markets. But this must be done through the private sector not government agencies-neither the Food Distribution Corporation and CASHPRO were self-sustaining and there is yet no indication that the NABCO is running on its own steam.

Meanwhile, there exists a cadre of aggregators in every region/district/community whose major constraint seems to include operational capital, haulage and storage. Meanwhile, there are different sources of financing for commerce with the ADB, NYEAA, NBSSI etc. that could be re-oriented towards these women traders/aggregators to increase their operational capacities and reduce their reliance on the urban retailers who often deliberately frustrate their efforts to make decent returns on their investment.

Currently, women aggregators operate on individual basis and independently arrange transport to bring food into market centres. With the proposed organized collection and haulage, these women will have more reliable means of moving food and assured markets thus creating opportunities for improving the economic viabilities of their small scale businesses

Haulage and Distribution
Secondly, with an increase in the feeder road networks and increased access to farm gates through the use of tricycles (‘aboboyaa’) I believe there is great opportunity to create employment avenues for our youth in the rural communities. The same credit facilities as mentioned above could be extended to groups of young men and women to increase their operation capacities from the farm gate to various nodal points. From there another level of haulage packages can be facilitated to move food to market centres in the urban centres.

Employment and Revenue Generation
MMDAs who depend on market tolls for the bulk of their revenues are encouraged to explore areas of facilitating the operations of private aggregators and haulers to link with identified urban market centres for the sale of commodities in which their districts have production advantages. For example, it is known that under PFJ there were quantum increases in plantain production which was exported to some Sahelian countries.

With the closure of borders, it is recommended that food from the Agogo and other areas in the Afram plains be redirected to Accra, Kumasi, Takoradi and Cape Coast. When effectively managed, such arrangements will boost inter-district trade and collaboration, timely redirect food items to where they are most needed and reduce defaults in payment to farmers thus empowering them to increase their production levels.

Packaging
Finally, it was realized that the COVID-19 restriction period made a demand for food in household packages quite attractive. Most middle-income households and young professionals buy their food requirements on a weekly basis for convenience in three main areas

To respond to this challenge, MMDAs can generate incomes through organized packaging to promote standardization in weights and measures. Young women and men under the National Builders Corps can be engaged in packaging local staples to meet the demand of such urbanites. Unfortunately, the inability to apply approved weights and measures in the sale of local staples has been a major source of revenue loss to the Ghanaian farmer. As well, MMDAs can better organize commodity locations at various market centers to reduce congestion and help meet planning and environmental standards in our food markets.

Conclusion
To every dark cloud, there is a silver lining. In the past 4 years, Ghana has embarked on a comprehensive program to modernize her agriculture from subsistence to a market-oriented economy with a view to transforming her hard-working farmers into agri-entrepreneurs with competitive incomes.

Whilst COVID-19 has brought considerable hardships to urban dwellers it seems our hardworking farmers are not as hard hit in their enterprises. Unfortunately, it will take a calculated effort to reward their hard work by facilitating systems that will enable them get decent returns on their investments. It is hoped the foregoing will be a wake-up call to both our public and private sector decision makers to take another look at support to the agriculture sector as a key contributor to Ghana’s GDP.

Nana Oforiwaa Koranteng, a Development Economist, is the Principal Consultant at MIGALS Consulting Service Ltd. Her expertise is in Agriculture Policy, Food Security, Regional/Rural Development planning, the design and use of Monitoring & Evaluation Systems