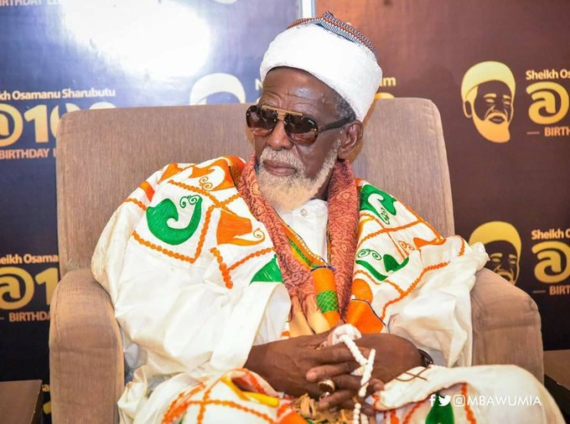 The National Chief Iman, Sheikh Dr Osmanu Nuhu Sharubutu, has paid a historic visit to his ancestral home at Axim in the Nzema-East Municipality of the Western Region.

The visit follows a befitting homecoming summit in honour of the-103-year old Spiritual Father of the Muslim Community in Ghana.

The National Chief Iman was accompanied by the Metropolitan Archbishop of the Catholic Church of Cape Coast, Most Reverend Gabriel Palmer Buckle, also a native of Axim and personal friend of Dr Sharubutu, and his Spokesperson, Sheikh Aremeyaw Shaibu.

Dr Sharubutu was given a rousing welcome as school children, family, and guests ushered him into Axim with brass band music procession.

The Municipal Chief Executive for Nzema-East, Madam Dorcas Elizabeth Amoah, welcomed him and his entourage to her residence and expressed her gratitude for the visit.

She said the visit would cement the relationships between the office of the National Chief Iman and the Axim Community and Nzema Manle.

She prayed that Sheikh Dr Nuhu Sharubutu would continue to visit home to cement his relationship with them.

His Grace, Archbishop Gabriel Palmer Buckle, expressed great pleasure that he and  the National Chief Iman hailed from Axim.

He described Sheikh Dr Sharubutu as a pillar in Islam, a peace-loving person, unifier and a beacon of hope and development in the country and the world.

He described the Chief Iman’s role in conflict resolution in parts of the country as giant strides to ensure peace.

The Paramount Chief of the Lower Axim Traditional Council, Awulae Attibrukusu, commended the National Chief Iman for making Axim and Nzema proud by occupying the highest office of Islam and contributing to the religious and socio-economic development of the country.

He paid a glowing tribute to the Development Queenmother of Upper Axim, Obahyema Erza Ngonlomah, for spearheading the home-coming summit and to the planning committee for a good job done.

The National Chief  Iman, through his Spokesperson, Sheikh Aremeyaw, thanked traditional rulers and the planning committee for making his visit a reality.

He recalled some years back when he used to pay frequent visits home during which he spearheaded the building of a mosque in Axim and prayed to continue to visit home to be a blessing to Axim and Nzema Manle.

DISCLAIMER: The Views, Comments, Opinions, Contributions and Statements made by Readers and Contributors on this platform do not necessarily represent the views or policy of Multimedia Group Limited.
Tags:
Chief Iman
Sheikh Dr Osmanu Nuhu Sharubutu