Indiana's long first-round test may wind up providing the blueprint to reach the Eastern Conference finals.

After spending seven games adapting to Atlanta's array of 3-point shooters, the Pacers think they can use a similar defensive plan against John Wall, Bradley Bealand the Washington Wizards when their second-round series starts Monday night.

''I think (Atlanta) helped us in terms of understanding how to be in gaps, being there for one another, rotating, so we're ready for the next round,'' Indiana's Paul Georgesaid.

Because the Hawks had Indiana on the brink of elimination after taking a 3-2 lead last Monday, the Pacers had only one full day to implement their Washington game plan.

Wall, Beal and Trevor Ariza pose a similar challenge to Atlanta because of their speed and versatility.

''They play somewhat similar to what we do,'' Beal said, talking about the Hawks. ''And the Pacers are just a big, physical team. They can play fast, but they can play slow at the same time, and that's a great defensive team. So we're definitely going to have our hands full.''

Unlike the Hawks, Washington relies on a more traditional power game with Marcin Gortat and Nene – something that could play right into the Pacers' hands, especially ifDavid West and Roy Hibbert remain as effective as they were in Saturday's series-clinching win.

Either way, the Pacers believe they can make it work.

Here are five more things to watch for in the Eastern semifinals:

REST OR RHYTHM? The Wizards had five days to heal after beating the Bulls in five games. The Pacers, meanwhile, had to play their starters extensively to survive the first round. Washington's challenge was staying sharp without playing. ''For me, the more time, the better,'' veteran forward Al Harrington said. ''But for these (younger) guys, I know they're champing at the bit, they're ready to go.'' The young Pacers probably don't mind the quick turnaround after the regular starters finally won back-to-back games for the first time since mid-March. 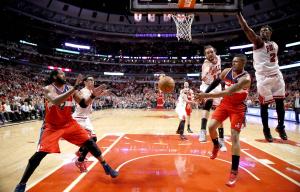 DEJA VU: The first time Indiana had the top seed in the East, it was pushed to the brink in the first round by Milwaukee. After surviving that best-of-five series with a 3-2 series win, the Pacers went on to win the Eastern Conference title before losing to the Lakers in their only NBA Finals appearance.

D.C. MILESTONES: The Wizards have been ticking them off one-by-one. First playoff appearance since 2008. First series win since 2005. Next stop: Getting past the second round for the first time since the 1970s. They've reached Round 2 only twice since then – getting swept by the Heat nine years ago and losing 4-1 to the Celtics in 1982 – and haven't won a second-round game since April 28, 1982, when Frank Johnson and Spencer Haywood scored 26 points apiece in a 103-102 victory against Larry Bird and the Celtics when Washington was still the Bullets. If the Wizards advance, they would be the lowest seed in the conference finals since the Knicks in 1999.

BIG MO: After a second-half swoon, the Pacers finally have some momentum. The regular starters have won two straight for the first time since mid-March. George has six double-doubles in his first seven games. Lance Stephenson is back to being his fun-loving self. Even Hibbert was productive in Saturday's win. Indiana has teased its fans with other promising wins (see Chicago, Miami and Oklahoma City). What everyone wants to know is which version of the Pacers will show up in the conference semis?

HOME COURT EDGE: While Washington won the last meeting between these teams, 91-78 on March 12, the Pacers have won 12 straight at Indy including twice this season. The Wizards last win at Bankers Life Fieldhouse came April 18, 2007.