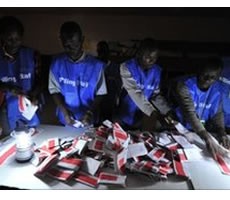 Personnel of the National Commission for Civic Education (NCCE), has advised political parties to engage party agents that would give true accounts of what would happen at polling stations in Election 2012 ,to prevent clashes.

Mr. John Bosco Yaagi, Deputy Upper West Regional Director of the NCCE, observed that some political party agents spread false information about happenings at the polling stations to their supporters, which result in violence and dent the credibility of the elections.

Mr. Yaagi, who said these at the inauguration of the Wa Municipal Inter- Party Dialogue Committee at Wa on Thursday, called on the parties to educate their supporters on laws governing the electoral process.

The Committee will among other objectives serve as a unifying organ that would promote peace and resolve conflicts before, during, and after Election 2012 to enhance political, economic and social progress and stability, and provide a platform for key stakeholders to engage with political parties.

Mr. Yaagi condemned massive transportation of prospective voters to register at particular constituencies for the purpose of gaining political advantage, and urged political parties and their parliamentary candidates to refrain from such unhealthy political acts.

He urged the public to register when the register opens for biometric registration exercise, and cautioned them not to rely on their old registration cards since that would not qualify them to vote in the next polls.

Mr. Yaagi advised the public that when people suspected to be aliens attempt to register, they should be challenged and reported to the appropriate authorities instead of physically attacking them.

Mr. Sumani Kassim, Wa Municipal Director of the NCCE, urged the committee to source funding from the political parties, donors and development partners, Metropolitan/Municipal and District Assemblies and NGOs for the sustenance of their work since the NCCE was financially handicapped.