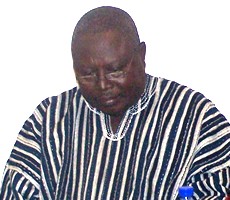 Nobody should waste his/her time to dare Mr. Martin Amidu, former Attorney General and Minister of Justice under President Mills’ government, who has lately turned himself into a buzzing fly (wansema pobi), making a lot of perky noise with the view to drawing some attention to himself. President Mills and the NDC should not waste time responding to Martin Amidu’s daring challenge. It is not worth the effort. In fact, the last time I checked, there was no football, basketball, hockey, boxing, rugby, ampe or agutter gutter contest in the offing, therefore, I do not know why Amidu is daring anybody.

He has just waded in to the African Automobile Limited saga on the cross country vehicles which the NDC imported before they left office in 2001, but the NPP after assuming office used dubious means to cancel the contract leading to the current wrangling on the issue.

Never in my life have I seen such incompetence of that magnitude. Does Amidu think by stating that there is massive corruption at the ministry which he once headed, people will jump and applaud him for saying that? I think the good people of Ghana will rather look at him with horror and condemn him for being given such a big responsibility but failed woefully by exhibiting such incompetence which prevented him from weeding out the so-called corruption at the ministry.

I also have something for Martin Amidu. There is a good reason why law offices are normally referred to as law chambers. It is because the lawyer/client confidentiality is very paramount. That is why what transpires between a lawyer and his/her client stays in the confines of that chamber. Therefore, if you have a lawyer who happens to be the government’s or the country’s former top lawyer daring the sitting president to publish a letter he sent to him or else he was going to expose him for “unconstitutional” acts, then we have a serious problem on hand. If we ever cross that threshold, then I guess the lawyer/client confidentially clause is in deep danger, and obviously any client dealing with such a person should have serious cause for concern.

Martin Amidu, who knows very well that the Woyome case is currently in court, damned everything by commenting on the case by even stating the role he Amidu played in sending the case to court. Why would he say that when the case is still pending? And I am very disturbed that Amidu will even tell Ghanaians what transpired during his meeting with President Mills and even gave details. Can a trained and seasoned lawyer go that route? Can anybody ever trust Amidu with any kind of information not fearing that one day this man may reveal details to the public when he gets angry?

Martin Amidu who served President Mills as Interior Minister and later as Attorney General and Minister of Justice have been privy to information in the cause of his duty, which if he had been an ordinary citizen like me or you, he would not have. In every country, such information is considered highly confidential and does not belong to Amidu but the state. Therefore, I consider all the information Martin Amidu may have gathered and every conversation he may have had with the President and other government officials serving the President as privy information. It is not his personal information. Therefore, Amidu cannot under any circumstance threaten to reveal that information to the public.

I am therefore, amazed that Martin Amidu who is armed with lots of information is daring the president to provoke him so that he would go ahead and expose him. Let us just consider that Martin Amidu is defending someone accused of committing a crime and the accused person confesses the crime to him. As a lawyer, and as a judicial ethic, Martin Amidu is enjoined to either defend the accused person or back away from the case. Amidu can never defend the accused and later turn round to dare the accused to provoke him so that he will go ahead and disclose what the accused told him before. It is ethically wrong for a lawyer to do that. If you are a lawyer and cross that line you betray your judicial oath and you put people on notice as to the kind of lawyer or person you are.

Martin Amidu may be basking in glory for staying in the news lately but he is seriously damaging his reputation if not already dented. At the end of the day, I bet nobody would want him as a lawyer, since he would be viewed as a lawyer who cannot be trusted to keep confidentiality. People may say there goes the lawyer who can easily disclose what you told him if you fall out with him. And even family members and close associates will be very wary to confide in him since they do not know where the information may land.

Like it or not, lawyers are viewed as people who can keep clients information very confidential. So if you have a lawyer who has defended you before going out to threaten you, then the country’s judicial system may be in serious danger. Whoever advised Martin Amidu to go that route, may be leading him to his career doom, because his clients may start running away from him. Nobody would want to deal with somebody like Martin Amidu, who is acting like a loose cannon spilling information all around.

I will urge President Mills and the NDC family to mind their own business and simply ignore Martin Amidu who has turned himself into a loose mortar. Probably, Martin Amidu is thinking that since he is out of government he has nothing to lose by going bananas and saying anything on his chest to receive unnecessary praise from the opposition. But he may be missing the bigger picture, which has got to do with possible clients and friends. At the end of the day people would rather judge him silently. And in life when there is something terrible about you, normally you are the last person to know.

As somebody who served as Deputy Attorney General in the last four years of the PNDC government and in that same capacity during the eight-years of the NDC government under ex-president Rawlings, Martin Amidu may not lack clients since he is a known face. Martin Amidu’s credentials were even boosted when he served as the substantive Attorney General for two years under President Mills before his ouster from office in January 2012. In every government worldwide, people are appointed and disappointed all the time. Some last longer whilst others don’t. But no matter how short you serve, you consider it as an honour and move on. It is normal for ministers to come on board and go.

Therefore, if you come on board and for some reason you leave, there is no point in saying you did not go and lobby for that position. That is childish and cheap talk. What did Martin Amidu gain by saying that? Martin Amidu has indeed portrayed himself as a cry-baby or someone trying to get even with others. Mr. Amidu, what you need to know is that you will not be the first person to be dismissed from government; neither will you be the last person. It happens all the time!

Martin Amidu may have made his mark in Ghana’s political history or his time as a lawyer. He should not let some anger that is currently seething within him, compel him to threaten his former masters/clients. The threat alone sends bad signals to potential and former clients of Martin Amidu and at his age such anger is not even good for his health.

If I were Martin, I would just leave posterity to judge me. I will not try to prove anything in the media by writing letters or releases daring anybody. I don’t recall any former attorney general going that route in Ghana’s history. He has set a bad precedent and this is what will tarnish his reputation and not some comments made against him by some people.