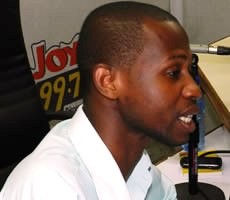 The National Youth Organiser of the breakaway National Democratic Party (NDP) says the party will not take the disqualification of their presidential candidate from contesting the December polls lightly, stressing they will fight for justice.

Former First Lady Nana Konadu Agyemang Rawlings was disqualified by the Electoral Commission from contesting the 2012 presidential elections for failing to properly fill out her nomination forms within the deadline for submission of nomination forms.

Dr David Sunu, who insists the NDP filled the nomination forms according ‘to the rules’, was speaking on Joy FM’s Election Headquarters Friday.

He said in the 2008 elections, Dr Edward Mahama of the PNC was, after the deadline, given enough time to complete and return his nomination forms after the EC rejected it.

The youth organizer wondered why the same commission, at this time round, is refusing to give the NDP same opportunity to rectify the anomalies and return the forms, insisting that “justice is not being delivered here”.

Even after the EC chair, Dr Kwadwo Afare Gyan, has asked the party to meet him in is office, Dr Sunu claimed, they had to wait for hours only to be told that Dr Gyan was outside Accra.

He said the party is in talks with its lawyers to take a decision on what action to take next.