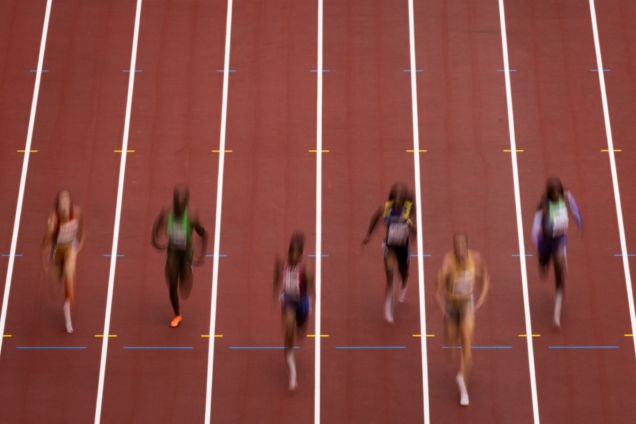 The clock stationed just past the finish line flashed 10.60 seconds and the letters “NEW OR,” meaning “new Olympic record,” when Elaine Thompson-Herah of Jamaica won the women’s 100 meters on Saturday night.

Thompson-Herah had not only retained the 100-meter Olympic title she won in Rio de Janeiro in 2016, but she had done so by shattering Florence Griffith Joyner’s record set in 1988. (Thompson-Herah’s official time in the record books is 10.61.)

One day later, Lamont Marcell Jacobs of Italy produced an even more stunning time — 9.80 seconds — to win the men’s 100, becoming the surprise winner of the race to supplant Usain Bolt as the world’s fastest man. Jacobs was little known before storming to the fastest time in an Olympic final by a man not named Bolt.

Both runners beamed after their races. But so did an anonymous figure dressed in a shirt and slacks in a seat overlooking the track: Andrea Vallauri, international manager for Mondo, the Olympic track supplier.

Since Friday — the first day of the track and field competition — records and personal bests have tumbled. Heat after heat, the scoreboard has flashed notations indicating that personal bests or national records have been eclipsed.

Six women ran under 11 seconds in the women’s 100 final, including Shericka Jackson, whose 10.76 was the fastest third-place finish at an Olympics. On Sunday, Jacobs, an unheralded sprinter who had specialized in the long jump until 2018, set a European record in the men’s 100 final.

“It’s new for Tokyo,” Vallauri said of the track’s lightning-fast surface. “We had a special ambition to come up with something different.”

While Olympic Stadium, designed by Kengo Kuma, has won praise for the way the giant bowl laced with wooden eaves has allowed it to blend into its surroundings, none of that really matters to the athletes performing inside it. What is far more important to many of them is the surface they are required to sprint, hop, skip and jump on.

For Vallauri, the early signs from the track competition have been an Olympic triumph of a different sort. Mondo, which has now designed 12 Olympic tracks, spent almost three years coming up with the surface in use in Tokyo: road testing different versions, sourcing materials, experimenting with different kinds of rubber. Along the way, Mondo asked athletes for their preference, the equivalent of a taste test of a new recipe for a familiar soft drink.

The answers the company received, Vallauri said, were unanimous. “The feedback from the athletes was the same,” he said. “This one.”

Armed with that feedback, designers at the Mondo factory in Alba, Italy, near Turin, experimented with different types of rubber before incorporating three-dimensional granules in their final design. The surface that resulted, according to Vallauri, allows shock absorption and energy return “like a trampoline.”

Those who have run on it have said the same.

“You can feel the bounce,” said Sydney McLaughlin, a favorite in the women’s 400-meter hurdles. “Some tracks just absorb your bounce and your motion; this one regenerates it and gives it back to you.”

Thompson-Herah suggested that had she not begun her celebration a few yards before the finish line, she might have threatened Griffith Joyner’s world record of 10.49. “I could have gone faster if I wasn’t pointing and celebrating early,” she said.

Her performance mirrored others across the first two days of competition: Times have exceeded expectations.

In a sport with recurring issues of doping, standout performances can fall under suspicion. But Vallauri and athletes say the “bouncy” track, as several described it, is playing a big role (along with high-performance shoes and even the hot summer air).

Vallauri said he expected the $1.5 million track to offer a benefit of as much as 2 percent to competitors. When records are broken by hundredths of a second, that could be the difference.

Marie-Josée Ta Lou of Ivory Coast was in a state of disbelief after learning how fast she had run in the first round of the 100-meter heats on Friday. “I really didn’t expect to run as fast as I just did,” she said. She went on to finish fourth in the final.

After easing through her heat on Saturday, McLaughlin, 21, suggested the Tokyo track was a threat to the history books.

“A world record is possible,” she said of the hurdles. “It is a really great group of girls, so I wouldn’t put it past anybody to go out and do it.”

While the name Mondo is likely unfamiliar to most sport fans, it has instant name recognition with athletes. More than half of the world records set in the last 20 years have been on tracks designed by the Italian company, the company said.

“We were watching the girls yesterday and we said, ‘OK, this track is fast,’” the South African sprinter Gift Leotlela said after sealing his qualification place in the 100-meter semifinals.

The track has offered assistance not only to those who want to run quickly, but also to those who propel themselves into the air. After competing in the long jump qualifications, Samory Fraga of Brazil said the surface was good enough to threaten records.

On Sunday, in the triple jump, Yulimar Rojas of Venezuela soared out to 15.67 meters, or almost 51 feet 5 inches, to beat a world record that had remained in place since 1995 and an Olympic record from 2008. Rojas was not alone in her disbelief; her rivals also stared, eyes wide, when the stadium’s video screen confirmed her winning mark.

For some athletes, a track like the one they are encountering in Tokyo does have some drawbacks: It is pushing their bodies in ways that slower surfaces typically do not.

The French sprinter Jimmy Vicaut, who ran a season’s best to make the 100 semifinals, said training on such a surface would be “too dangerous” because it could easily risk muscular injuries. Gavin Smellie of Canada said the track was so unforgiving that he changed the way he typically prepared for a race.

“It makes your body feel sore, especially the following day,” he said. To accommodate that, Smellie said, he moved his training schedule 24 hours earlier to give himself more time to recover.

The pursuit of fast times has pushed a few athletes too far. After running a personal best to reach the men’s 100-meter final, Enoch Adegoke of Nigeria failed to finish the race, reaching for his hamstring after about 20 meters. Other runners, including Dina Asher-Smith of Britain, said they aggravated injuries.

Still, for the most part, those concerns took a back seat to the quest for records and to praise for the surface on which they would be pursued.

Developments in track technology, like the advancements in shoe design, have raised questions about how much assistance athletes should be allowed, and whether it was fair that records set in different conditions are now at risk.

To mitigate some of those advantages, track and field’s governing body, World Athletics, has stipulated limits for tracks akin to those in place for shoes, including limits on the range of shock absorption, energy return and thickness.

To Vallauri, though, the mission is a simple one: Provide a surface on which Olympic athletes can thrive, whatever their discipline, whatever their status. He likened the track to the tires in the elite Formula 1 racing series.

“If the tire is the same for all the cars, then it’s fair,” he said.