Newcastle beat Burnley for first win of season to move off bottom - MyJoyOnline.com 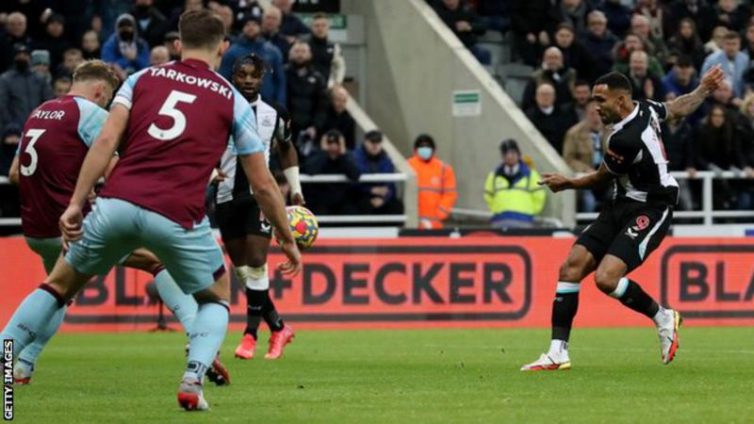 Callum Wilson scored the only goal as Eddie Howe’s Newcastle claimed their first win of the season at the expense of fellow Premier League strugglers Burnley.

Wilson steered the ball into the roof of the net from the edge of the area after Burnley goalkeeper Nick Pope fumbled Joe Willock’s cross under pressure from Fabian Schar.

Burnley created the better openings before Wilson struck, Maxwel Cornet twice going close and Johann Berg Gudmundsson striking the outside of the post via a deflection off Javier Manquillo.

Matej Vydra also missed a glaring opportunity to equalise on the stroke of half-time, shooting tamely over the crossbar from Matt Lowton’s right-wing delivery.Miguel Almiron was played through by Wilson in the second half but was denied a first goal in 26 league games by Pope.

The visitors thought they had equalised with seven minutes remaining when Jay Rodriguez was ruled to be in an offside position from Ashley Westwood’s pass.

Newcastle, who also earned their first clean sheet of the season at St James’ Park, moved up to 19th in the table, level on 10 points with bottom club Norwich and 18th-placed Burnley.

First of many for Newcastle?

It was far from pretty, but Howe will hope Saturday’s nervy victory can kick-start Newcastle’s campaign – nearly eight weeks after their £305m Saudi Arabia-backed takeover.

The Magpies had failed to beat four of the eight teams directly above them in the Premier League before the visit of Sean Dyche’s side, and they were perhaps fortunate not to fall behind early on as Burnley made the brighter start.

But Newcastle improved following Wilson’s opener – Joelinton and Jonjo Shelvey had efforts blocked before Willock blazed over the crossbar from Allan Saint-Maximin’s cut-back.

A second goal would have eased some of the palpable tension around St James’ Park, but Almiron was denied by a magnificent one-handed Pope save before shooting straight at Nathan Collins after cutting on to his left foot on the edge of the area.

Rodriguez beat Martin Dubravka late on with a confident finish but was denied a 100th career league goal by the assistant referee’s flag.

Howe, who punched the air in delight at full-time, will be thrilled with Newcastle’s resolute defensive showing, although – the opening 20 minutes aside – they were rarely troubled by a toothless Burnley.

The visitors registered 10 attempts at goal but their only legitimate shot on target came through Cornet in the first half.

Dyche’s team are without an away win in the Premier League since beating Fulham back in May.