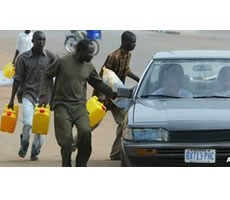 The Nigerian authorities have announced the start of a controversial plan to scrap fuel subsidies – which is expected to push up petrol prices.

The government has spent more than $8bn (£5.2bn) on the subsidies in the past year and says it will use some of the money to improve infrastructure.

Many Nigerians regard cheap fuel as the only benefit they get from the nation’s oil wealth.

The announcement was made in a statement from regulators, which said the changes would begin immediately.

“The Petroleum Products Pricing Regulatory Agency wishes to inform all stakeholders of the commencement of the formal removal of the subsidy on Premium Motor Spirit,” it said.

“Consumers are assured of adequate supply of quality products at prices that are competitive and non-exploitative and so there is no need for anyone to engage in panic buying or product hoarding,” it read.

“We alert the populace to begin immediate mobilisation towards the D-Day for the commencement of strikes, street demonstrations and mass protests across the country,” the statement said.

“This promises to be a long drawn battle; we know it is beginning, but we do not know its end or when it will end.”

“We are confident the Nigerian people will triumph,” it said.

Nigeria is Africa’s biggest oil producer but most of the available 2 million barrels per day are exported in an unrefined state.

The country lacks refineries and infrastructure so has to import refined products such as petrol, which is expensive.

Nigerians are heavy users of fuel, not just for cars but to power generators that many households and businesses use to cope with the country’s erratic electricity supply.

Petrol prices in Nigeria are currently very low by international standards at $0.40 (£0.26) per litre.

Previous attempts to end the subsidies in Nigeria have prompted industrial action and street protests.

A strike against fuel price rises in Nigeria in 2004 caused most petrol stations to close, leading to transport chaos and a thriving black market in petrol.

The measures just announced could add to the difficulties faced by Nigerian President Goodluck Jonathan, who declared a state of emergency on Saturday in areas hit by Islamist violence.