More than 50 vehicles, including five buses, were set ablaze after the truck lost control and spilled its contents on a busy motorway during rush hour.

The tanker is said to have crashed after its brakes failed.

The incident on Thursday occurred at about 17:30 local time (16:30 GMT) on the Lagos-Ibadan expressway, one of the main motorways into the city. 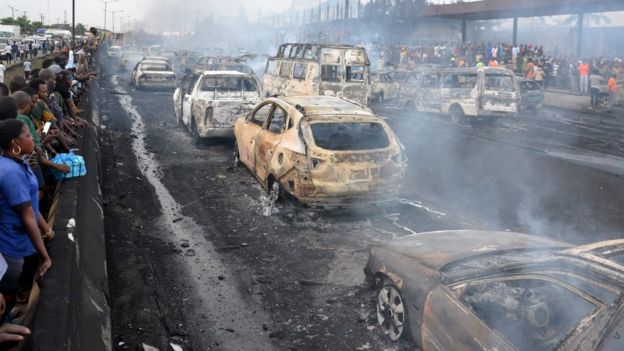 The incident occurred during rush hour on a busy motorway

A representative from the Federal Road Safety Corp (FRSC) told the BBC that the tanker lost control as it approached a bridge, and ended up falling on its side.

Petrol then began pouring from the tanker and a fire erupted. The blaze quickly spread from vehicle to vehicle.

Images later showed black smoke rising from the road and the shells of several burnt-out cars. 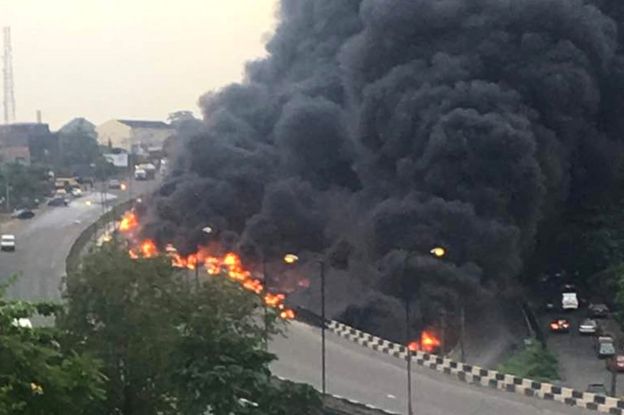 Nigeria's President Muhammadu Buhari said he was "very sad to learn of the tragic loss of lives".

"Sadly, this seems to be one of the greatest tragedies we have seen in recent times," he said in a statement.

Government spokesman Kehinde Bamigbetan said it was time "to find ways of ensuring that tankers are driven by drivers who have more responsibility".

"We need to work more with federal agencies so we don't have these crises all the time," he said.