Nigeria's presidential and parliamentary elections have been delayed for a week.

The Independent National Electoral Commission (INEC) made the announcement just five hours before the polls were due to open on Saturday.

He said the difficult decision was needed to ensure a free and fair vote.

The presidential and parliamentary votes have been rescheduled for Saturday 23 February.

The announcement came after an emergency meeting at the INEC headquarters in the capital, Abuja.

Nigeria's two main political parties, the ruling All Progressives Congress (APC) and the People's Democratic Party (PDP), swiftly condemned the move and accused each other of trying to manipulate the vote.

Why have elections been postponed?

Mr Yakubu said the decision was made following a "careful review" of the election "operational plan", adding that there was a "determination to conduct free, fair and credible elections".

He said the delay was necessary to give the commission time to address vital issues and "maintain the quality of our elections", but did not provide further details.

In the past two weeks several INEC offices have been set alight, with thousands of electronic smart card readers and voter cards destroyed.

There have also been claims of shortages of election material in some of the country's 36 states. 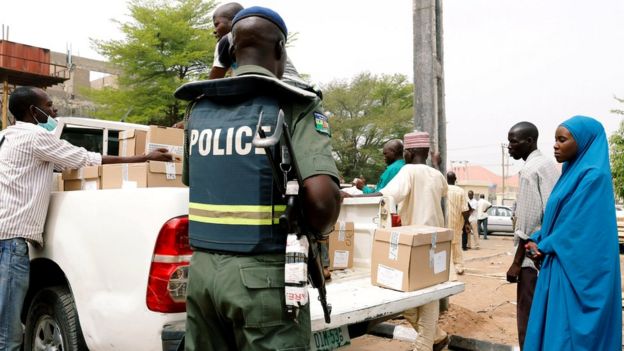 Nigerians will be waking up wondering whether the postponement is another bout of fake news.

The build-up to what was supposed to be the vote has been affected by false stories that the electoral commission and others have had to deny. But the postponement announced in the middle of the night is real.

Those Nigerians who had intended to vote would have planned their day around it. The whole country was essentially going to shut down as travel was restricted, so the only options were to stay at home or go to the polling station.

Many have also already travelled to the places where they were registered to vote. They will be left wondering what they will do for the next week.

The country is known for pulling things off at the last minute, but this time it wasn't to be. This will have left a sour taste in the mouths of the electorate, which is already cynical about the political process.

Nigeria has been forced to bolster its security, with the run-up to the elections marred by violence.

On Friday, officials in north-west Nigeria reported the discovery of the bodies of 66 people, 22 of them children and 12 women, killed by "criminal elements".

How important is this poll?

The future of Africa's most populous nation and largest economy is at stake.

Whoever wins will have to address power shortages, corruption, security problems and a sluggish economy.

There are 73 registered candidates in the presidential election, but campaigning has been dominated by President Muhammadu Buhari, 76, and his main challenger, former Vice-President Atiku Abubakar, 72.

Mr Buhari says he has built a strong foundation for prosperity, but his rival says Nigeria is not functioning.

Both men are from the mainly Muslim north of the country. While both are in their 70s, more than half of Nigeria's 84 million registered voters are under 35.

Has Nigeria had election issues before?

Yes. Nigeria is not new to voting postponements – previous elections in 2011 and 2015 were delayed by several days.

In 2015, the country ordered the closure of all its land and sea borders ahead of tightly contested elections amid reports that foreigners planned to cross into Nigeria to vote.

That same year, one of the candidates died while the votes were being counted.