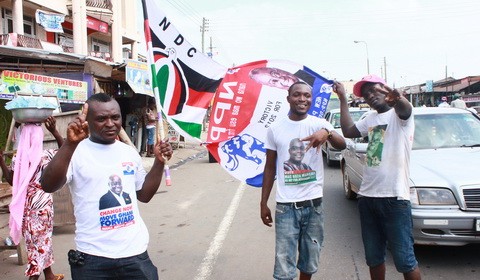 For the young, undecided and first time voters, the significance of seeing supporters of the two major political parties walking on different sides of the road but singing the same peace and unity songs would etch on their minds as they vote.

The weekly recreational walks begun as far back as October 2012 as an initiative of the various pro-Mahama groups led by Zongos for Mahama.

However in recent weeks, the numbers have steadily rose, culminating in the biggest turn out on the last weekend before elections.

Leading the march from the front with the theme “Your opponent is not your enemy” was Movement for Mahama, Youth for Mahama, Young Democrats and Students for Mahama as well as other closely related NDC youth campaign groups.

Yaw Ampofo Ankrah who was leading the march with “Movement for Mahama” praised the thousands of NDC youth who converged as early as 5am for their comportment and discipline. “This is exactly the sort of event that motivates me as a new student on the political scene. I wish we can repeat this all over Ghana and show that indeed we have more that unites us than divides us. I have no doubt that our youth would carry this attitude to vote massively for John Mahama on Friday”.

The much smaller but vociferous NPP group led by the Young Patriots were not intimidated as they also blasted party songs and popular tunes on opposite sides of the streets from Nima roundabout all the way to Pig Farm.

A staunch NPP supporter in Nima Alhaji Abass, said he had never witnessed such an event in Nima’s political history. “This is a very good sign for everybody because in the past some people would come here and bring trouble but now our children are wiser and cannot be influenced just like that”.

His view was shared by another long time resident of Nima Hajia Fati who is a well known NDC sympathizer. “The message of peace is working and now we can see the results. From our father Mills to his son Mahama it is the same and the youth are only following the good example of their leaders not to act in a violent way or say violent things”.

Among the crowd was Dr. Ahmed Mustapha who is the current NDC parliamentarian for Ayawaso East constituency.

“People may be surprised by this but for many years now we have been working on our children and now we see the results”.

According to the organisers of the march, the fantastic conduct of the people of Nima over the past few months of campaigning will be rewarded with the hosting of one last major rally of all NDC Youth groups before going to the polls on Friday.