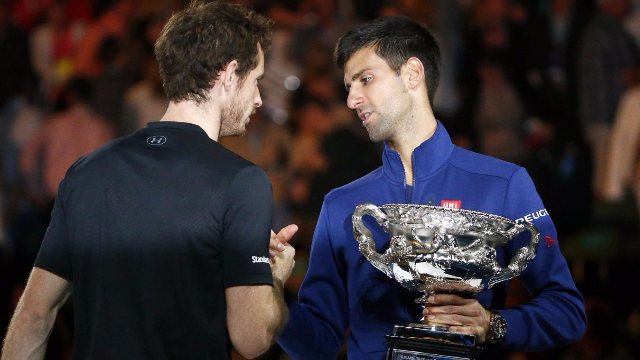 Novak Djokovic claimed his sixth Australian Open and an 11th Grand Slam title with his fourth victory over Andy Murray in the final at Melbourne Park.

The Scot – who lost to Djokovic in the final in 2011, 2013 and 2015, as well as Roger Federer in 2010 – continued his painful losing streak at Australian Open finals thanks to an error-strewn performance in which he never really looked capable of knocking Djokovic out of his stride for any significant period of time.

The Serb moves onto 11 Grand Slam titles as his almost unprecedented era of domination continues, with his fourth win in the past five Grand Slams. After vanquishing Murray again, he bent down to kiss the court.

"I feel like I've been here before," said Murray. "I'd like to congratulate Novak for six Australian Opens, it's an incredible feat; also for what he has done in the past year. Incredible consistency. I just want to say well done to him and his team – great job."

Murray is soon to be a father with his wife Kim expecting their first child, and the world number two had a touching message for his partner as he prepares to fly back and be by her side.

" To my wife Kim, who I’m sure is going to be watching back home. You have been a legend the last two weeks. Thanks for all of your support – I’ll be on the next flight home."

Djokovic paid tribute to Murray after extending his recent record over the Brit to 11 wins from 12 meetings.

“I need to pay the respect to Andy and his team for another tournament,” he said. “You are a great champion and a great friend. I’m sure in the future you are going to have more opportunities to fight for this trophy. I would also like to wish you and Kim a healthy delivery of your baby and I hope you will experience a feeling like no other before, because that’s what happened to me and my wife.”