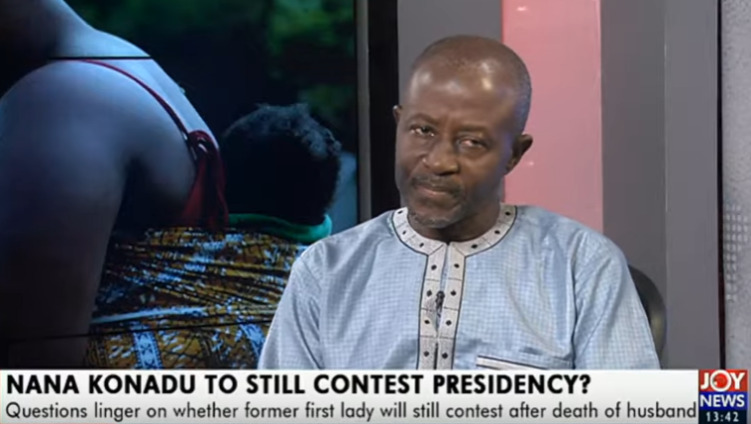 NDP General Secretary, Alhaji Mohammed Frimpong has described calls for the party’s flagbearer to step down from the 2020 elections over the demise of her husband as “wishful thinking of a detractor”.

According to him, this demand by Nunoo-Mensah for Nana Konadu Agyeman-Rawlings to step down as a respect to her late husband is unfounded.

“General Nunoo-Mensah’s suggestion is tongue in cheek. Maybe he would have wished to say this long ago, even before the demise of the former President.

“He only took the occasion of President Rawlings’ passing to make his case,” he added.

The death of former President Rawlings raised several questions about the fate of the former First Lady’s political ambitions.

The former Chief of Defence Staff of the Ghana Armed Forces, Brigadier-General Joseph Nunoo-Mensah (Rtd) stated in an interview on Friday, that the NDP flagbearer [Konadu Agyeman-Rawlings] saves her husband ‘that embarrassment by pulling out” of the general election.

But speaking in an interaction with Joy News’ Araba Koomson on Monday, November 16, Alhaji Frimpong disagreed with the assertion and maintained that continuity in development is usually incumbent on the partner of a deceased politician.

“His statement or declaration is not supported in anyway, because there is no tradition that links political activity to backing out of Presidential ambitions over the death of a spouse, especially as a mark of respect in his memory.

“All the world over, spouses have supported one another in very noble deeds. It is indeed the spouse who must live and fulfill the political testament that Flt. Lt. Jerry John Rawlings had left.

“He is a possession of the nation, and the former First Lady had supported him in whatever way that made him so much cherished,” he said.

DISCLAIMER: The Views, Comments, Opinions, Contributions and Statements made by Readers and Contributors on this platform do not necessarily represent the views or policy of Multimedia Group Limited.
Tags:
Alhaji Mohammed Frimpong
Brig. Gen. Nunoo-Mensah
Election 2020
Nana Konadu Agyeman-Rawlings