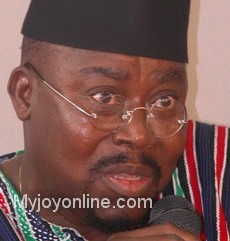 Lt. Col. Larry Gbevlo Lartey, Ghana’s National Security Coordinator, who once headed the disbanded 64 Battalion Unit of the Ghana Armed Forces, has come under heavy criticism for his “casual dismissal” of the ‘subversive’ voice recordings claimed by the National Democratic Congress (NDC) National Organiser, Yaw Boateng Gyan, to be his own voice – now referred to as the ‘Yaw Boateng Gyan’s tape.’

As many peace-loving Ghanaians, including civil society organisations rising to the occasion to condemn the Yaw Boateng Gyan’s ‘hidden motives,’ as well as calling for an urgent investigations into the matter to assure the nation’s stability ahead of the December polls, the National Security Coordinator said on Monday that the controversial ‘secret tape’ has “nothing of value worth investigating.”

“I have listened to the tape not less than five times… and have not found anything wrong with it”, Lt. Col. Gbevlo Lartey remarked to exonerate the NDC National Organiser.

But, Dr. Nyaho Nyaho-Tamakloe, an independent-minded opposition New Patriotic Party (NPP) politician, has taken a swipe at the security capo, describing his comment as “casual dismissal” of a serious national security threat, adding “it was a huge mistake for this man (Gbevlo Lartey) to be appointed as National Security Coordinator and his continuous stay in office poses danger to national security.”

Dr. Nyaho-Tamakloe in an interview with the New Crusading Guide yesterday, buttressed his position that the National Security Coordinator lacks the professional competence and experience which his predecessors applied using diplomacy and negotiations to calm down heightened national security tensions, arguing that he (Gbevlo Lartey) had become confrontational and abrasive in handling sensitive security matters.

“To me, Gbevlo Lartey is National Security Coordinator for the NDC and not for the State Ghana,” Dr. Nyaho-Tamakloe underscored.

He said he felt vindicated by his previous argument that the Department of National Security was not the appropriate body to investigate the tape recordings, insisting that its content would also implicate the investigating body.

He observed: “Given the gravity of this matter and its implication for peace and security during this sensitive election period, a casual disregard of disturbing information such as what was on the tape leaves the people of this country with no other option than to suspect that national security apparatus cannot be trusted as a neutral institution.”

Dr. Nyaho-Tamakloe, former ambassador to Serbia-Montenegro during Kufuor’s administration, contended that considering the legal background of Lt. Col. Gbevlo Lartey and military experience, his failure to response swiftly to security concerns are untenable, while calling on President John Dramani Mahama to relief him of his post to save the country from further security hiccups.

He also chastised Lieutenant General Nunoo Mensah, National Security Adviser, as operating in the ‘dark’, as he had not also made any comment on the Boateng Gyan tape affair saying, “Gen. Nunoo Mensah can take inspiration from his resignation as Chief of Defence Staff (CDS) in the Ghana Armed Forces during the PNDC regime on principle, when he detected that arms were being smuggled into the country without his knowledge.”

He challenged Lt. Gen. Nunoo Mensah to do same to uphold his professional integrity on national security regarding the Yaw Boateng Gyan’s tape.

He stated that the president should institute an independent inquisition into the matter to deal with the possible security threats that the audio recordings might have on the upcoming December presidential and parliamentary elections.