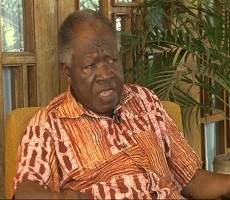 Historian K B Asante has warned that the Christianburg castle in Osu will deteriorate if left unattended to.

The retired diplomat stated categorically that converting the Castle into a museum would not work.

He insists the edifice must be used as a Government residence even if the President did not permanently live there.

Speaking on the historical antecedents of the Osu Castle and the President’s move to Flagstaff house on Joy News’ current affairs program pm:EXPRESS on MultiTV, Mr. Asante suggested the government uses the Castle as the Official Reception area.

He said, the President can entertain, have certain functions, keep his guests and state visits for example, at the Castle instead of turning it into a Museum.

He emphasized that, “it should be the place for state visits; for example, to be used as the residence of a visiting head of state for a day. This way, the Castle would be kept properly”.

On Thursday 7th February the President, John Dramani Mahama, moved the seat of government from the Osu Castle to the flagstaff house, bringing an era to an end.

Since Ghana’s Independence in 1957, the business of governing this nation has been held within the white stone walls of the pre-colonial castle overlooking the Atlantic Ocean.

Following the decision to re-locate the seat of government to the Flagstaff House, President Mahama announced that the Castle will be turned into a tourist attraction.

But K. B. Asante does not think, it is a good idea. He charged the President’s advisers to think of a plan to make good use of the Christianburg castle while maintaining its prim and proper character. As a conscession, K.B Asante said the castle could have specific days dedicated to tourism.

However, Mr. Asante’s position is at variance with the GA Dangbe Youth Association, which has been pushing for the management of the castle to be placed in their hands, challenging government to give them only a year of management, to turn the Pre-Colonial Castle with its rich history into an enviable tourist destination.

Speaking on their behalf, Nii Marmah Marquaye, President of the group said if they did not transform the castle into an enviable edifice in the set time they would avail themselves to imprisonment.