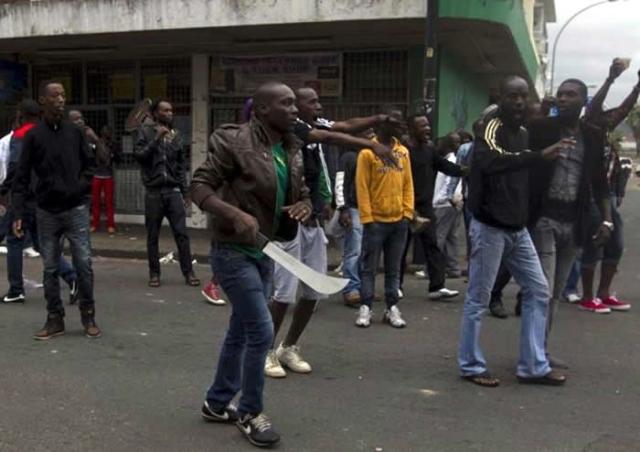 Several videos capturing harrowing scenes have emerged of South Africans subjecting other African nationals to beatings and other forms of torture.

Nigerians, who claim they’ve been the targeted group in the recent attacks have asked a clear line of action from their government.

‘Enough is Enough,’ one user wrote.

I think #EnoughIsEnough. The Nigerian Government ðŸ‡³ðŸ‡¬ really needs to TAKE ACTION NOW on the #XenophobicAttacks in South Africa ðŸ‡¿ðŸ‡¦. We helped them during Apatheid. See how they are treating us and other foreigners in their country ðŸ˜¡#Xenophobia #SouthAfrica #PretoriaCBD #BBNaiija

South African Shame on you guys. If you are hungry beg or ask for food instead of introducing #XenophobicAttacks in order to loot from our vigorous citizens. You will all pay for this dearly. Hunger will never depart your homes.https://t.co/hkVJg2NHsu@Bloomberg pic.twitter.com/4yeQSklkts

Nelson Mandela Just Wasted His Life For This People.
SA Is A Shit Country With Trash And Murderers As Citizens.#XenophobicAttacks

Was Fela Kuti wrong when he said “South Africa ðŸ‡¿ðŸ‡¦ is better than Nigeria ðŸ‡³ðŸ‡¬ because whites are killing blacks there,and black are killing blacks here in Nigeria ” looking at the current situation of the #XenophobicAttacks happening Deep South. It is still black on blacks.â”

My heart is so down,my eyes filled with tears!…

I just can’t believe it…

This is so sad

With these #XenophobicAttacks, I am never going to South Africa except as a diplomat

We spent billions of dollars to finance most of the leaders of the ANC in their struggle and they can’t even protect Africans in the same SA where they were mauled like dogs under apartheid?