Parliament considers ex-gratia for Mahama, others 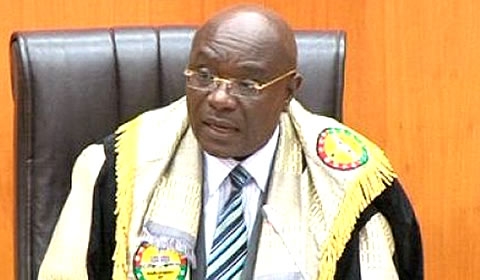 The consideration of the ex-gratia payment will be one of the final activities of the sixth Parliament of the fourth Republic before its tenure elapses on January 6.

Addressing the Members, the Speaker, Edward Doe Adjaho, said the House was reconvened in consonance with Standing Order 42 (3).

The House shall within the period left to elapse consider not only the ex-gratia payment but also prepare for the president's last state of the nation address on Thursday.

The Speaker also hinted that efforts will be made to pass the Right to Information Bill before the House rises.

Article 71 (1) and (2) of the 1992 Constitution stipulates that the determination of the salaries and allowances of the the Legislature and the Judiciary paid from the Consolidated Fund would be determined by the President, on the recommendations of a committee of not more than five persons appointed by him and acting upon the advice of the Council of State.

In determining the salaries of the President, his Ministers and political appointees, as well as the members of the Council of State, the Constitution states that Parliament will determine that based on the advice of the same committee.

According to Joy FM's Parliamentary correspondent, Elton John Brobbey the committee appointed by President John Mahama finished its work in August 2016 and submitted same to the president and the Parliament in September.

The two arms have within the next few days to consider and approve the recommendations made by the committee.

Brobbey reports that some members of the Article 71 office holders are pushing for an upward review of salaries and emoluments but nothing has been made public yet.

The constitution demands that the details of the report must be made public and not held in secret but the publication of the reports has always triggered a barrage of criticisms against the Article 71 office holders.

Many have criticised the office holders for taking home unreasonable amounts of money from the public purse at a time when the country's economy is not in good health.

In 2009, When the Mills administration took over from the Kufuor government, the late President John Evans Atta Mills ordered a freeze on the payment of the benefit, following public outcry over the quantum of ex gratia.

The action followed arguments over whether the document based on which the ex gratia was to be paid, received proper parliamentary and Executive approval.

The MPs were, however, paid what was due them, with each of them receiving an average of GH¢80,000.

In 2012, a total of GH¢47 million was paid by the government as ex gratia to the 230 Members of Parliament (MPs) who served in the Fifth Parliament of the Fourth Republic.

Out of the amount, the MPs who retained their membership of the House after the December 7, 2012 elections received GH¢276,000 each, while those who lost  their seats were paid GH¢311,000 each.

State of the nation address

The president is expected to address Parliament on Thursday, his last address as president of Ghana.

He would most likely tout his achievements within his four year tenure and offer suggestions as to how he wants the country to run.