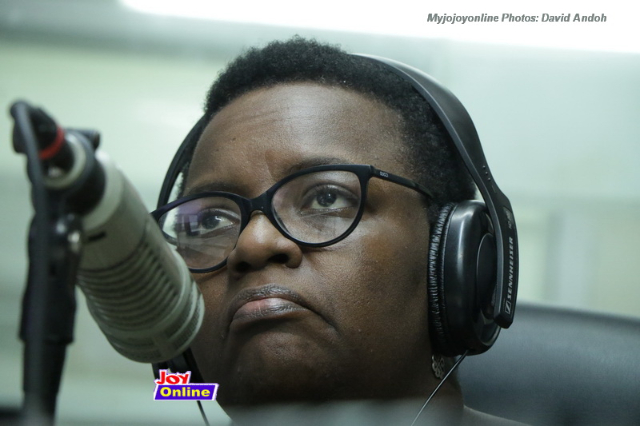 “I’m not asking for war,” said Kinna Likimani, the Director of political civil society organisation, Odekro. Although she also found peace a problem, a sort of smokescreen.

Fearful of war but trapped by peace, she expressed frustration at the “dysfunctional” state in which Ghana is.

She will not call Ghanaians undisciplined. “I hate that argument.”

“People are meant to be in systems that are good and functioning. That is how you get ‘freedom and justice’. If your system is bad you are in dysfunction,” she leaned much more on the broken system of enforcement.

“We are all part of the dysfunction,” she added herself and said Ghanaians are struggling to live a life of integrity because the system has become disrupted.

A catalogue of this dysfunctional system was littered throughout the interview with Daniel Dadzie on Joy FM’s Super Morning Show, Tuesday.

A High Commissioner appointed by the governing New Patriotic Party,  George Ayisi Boateng, who infamously said he would take care of party members first and National Chairman of the opposition National Democratic Congress, Samuel Ofosu Ampofo, who has proclaimed to party supporters that “no contribution, no chop”, made it to her list of examples.

A law lecturer, Justice Srem-Sai agreed. He noted those whose material lives change much more than the average Ghanaians are those within the political class.

Elections, a sort of nice day to collect worldwide accolades for democracy only for everyone to switch off on the most important matters –development, Likimani said.

“There is a PR job that has been done on Ghana,” she described the country’s love for elections.

Even religion “contributes to the dysfunction,” the social activist’s net spread even wider.

“We don’t have civil rights reverends,” she blamed pastors for failing to use the Bible to fire up Ghanaians to insist on their civil rights much like American Baptist preacher, Martin Luther King Jnr.

Hospitals that don’t save lives, down to corruption through procurement, the banks that are enjoying “amazing corruption”, her list grew longer.

Every problem from sanitation and insecurity creates an opportunity for people to loot through procurement.

“All the issues you talk about come down to looting and procurement fraud,” she said and picked up on regulators “always wearing nice suits to work and regulate nothing.”

Only for one day, boom – the Bank of Ghana announces that some banks lose their licences and 300 microfinance companies come crashing. Somebody has woken up to their job, she described banking sector reforms underway in Ghana.

She would borrow some of this awakening as a critical part of the solution for Ghana’s problems.

“We need to confront the political party system.” She called on Ghanaians to be courageous.

“When are we going to assert ourselves for what we want?” She revealed a longing for a bold confrontation at the leaders in charge of the system.

“We need to be a whole lot more upfront with the political system.”

Constantly, she would phrase and rephrase her solutions all to mean a strong push to insist on accountability from those who lead the country in every sphere.

Living in Ghana since 2004, the literary writer and gender activist no longer banks her hopes on any knight in shining armour called “transformational leader”.

“I don’t know what leader is going to come through this political party system that we have, to come and change Ghana.”

Only an awakened group willing to agitate for what they truly want will bring about change. Until that, the pro-looting Ghanaian politicians will continue to have their way, she said.

“This is how you loot Ghana. You maintain some peace and stability…our peace serves so that people have the space to loot.”