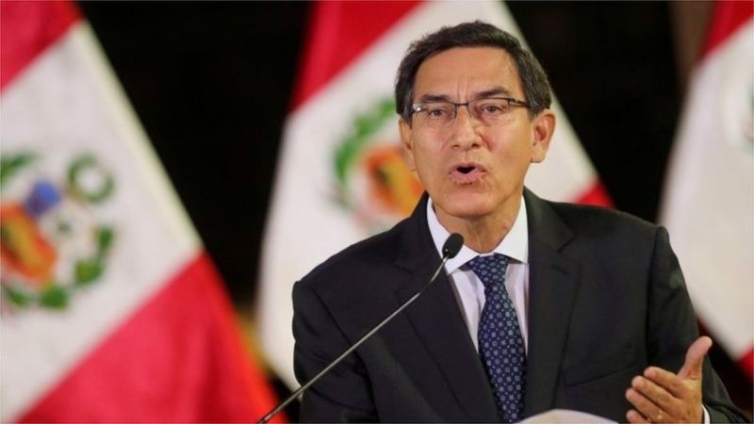 Martín Vizcarra has been in office since March 2018

Peru’s Congress is expected to vote later on Monday on whether to impeach President Martín Vizcarra over corruption allegations.

A previous impeachment vote held less than two months ago failed to get the necessary votes.

Eighty-seven votes are needed in the 130-member Congress to remove the president from his post.

Mr Vizcarra has denied any wrongdoing and says the vote creates turbulence just months ahead of elections.

Mr Vizcarra said he would go to Congress later on Monday to give his defence to allegations he accepted bribes worth 2.3m soles ($640,000; £487,000) when he was governor of the southern Moquegua region.

The impeachment vote is expected to be held once Mr Vizcarra has finished presenting his defence.

Last week, 60 lawmakers voted in favour of the proceedings going ahead, while 40 opposed the move and 18 abstained.

An impeachment vote held on 18 September fell far short of gaining the necessary votes when only 32 lawmakers cast their ballot in favour of removing Mr Vizcarra from office.

The impeachment proceedings two months ago focussed on allegations that Mr Vizcarra had misused public funds, which he denied.

Mr Vizcarra became president in March 2018 after his predecessor in office, Pedro Pablo Kuczynski, resigned amid allegations of vote buying.

Mr Vizcarra has been embroiled in a bitter battle with Congress, which is dominated by rival parties, since he took office.

A new Congress was elected in January but tension remains high between the legislative and the executive with Mr Vizcarra accusing lawmakers of fostering “chaos and disorder”.

Presidential elections are scheduled for April 2021 and Mr Vizcarra is banned by the constitution from running for a second term.