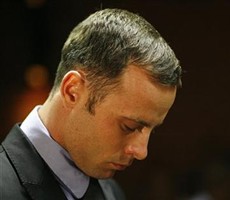 Oscar Pistorius plans to sell the upmarket $460,000 Pretoria house where he shot dead his girlfriend last year to cover the legal fees for his murder trial, his lawyer said yesterday.

“It has become necessary to sell Mr Pistorius’s home in the Silver Woods Country Estate in Pretoria in order for him to raise the necessary funds to cover his increasing legal costs,” the 27- year-old’s lawyer Brian Webber said in a statement. “This is due to the unexpected extension of the trial beyond the initial threeweek period for which it was originally set down.”

Estate agent Ansie Louw, who is handling the sale, told AFP the house will be sold in a closed bid, starting at five million rand ($460,000, 330,000 euro). The Paralympic athlete has been paying his own legal fees since he shot dead Reeva Steenkamp on Valentine’s Day last year, according to the statement.

The costs-reportedly as high as $9,000 (6,700 euros) a day-are said to include at least three full-time lawyers in court, ballistics and forensics experts as well as an American crime scene reconstruction company. Since the shooting Pistorius has been living at his uncle’s house in Pretoria. Prosecutors have charged the doubleamputee sprinter with intentionally killing 29-year-old Steenkamp after an argument, and are expected to wrap up their case early next week. Pistorius insists he fired four shots through a locked toilet door after mistaking the model for an intruder. The authorities turned the runner’s home in the gated community back over to him over a year ago and he had planned to keep it sealed until the trial finished. “He has been forced to revisit this decision,” according to Webber, who said the statement was meant to preempt media speculation about the sale.

Properties Pistorius valued the house at five million rand during his bail application in February last year. At the time he also owned two other houses with a combined value of 1.5 million rand in Pretoria and a vacant plot worth 1.6 million rand in Cape Town. All his properties together were worth 8.3 million rand, the sporting hero told the court. Pistorius earned worldwide fame as the “Blade Runner” for running on two carbon fibre blades, after both his legs were amputated below the knee when he was born without fibulae.

He became the first double amputee to compete with able-bodied athletes at the London 2012 Olympics. But he has fallen on hard times since the shooting, and lost many of the endorsement deals that earned him some $510,000 a year. His trial opened on March 3, and witnesses have testified to hearing a woman’s terrified screams in the dead of night, followed by gunshots. A police ballistics expert said Thursday the first shot from Pistorius’s 9- millimetre pistol shattered Steenkamp’s hip bone. She then fell over and was struck in the head by another bullet. The trial resumes