Players have not accepted Gyan as captain – Laryea Kingston 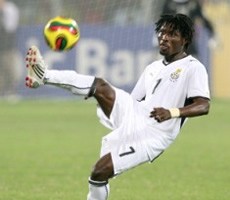 Former Black Stars midfielder Laryea Kingston is of the view players in the Black Stars have lost faith in captain Asamoah Gyan.

The former Hearts of Oak midfielder who played with Gyan between 2005 and 2010 was clearly dissatisfied with the demeanor of the players around the captain.

For Laryea, these negative behaviors do not bode well for the team.

“Leadership is very important in the team. As a leader, the people around you have to accept you. But at the moment, I don’t think the players accept their leader [Gyan] because sometimes on the pitch, you can even feel some negative energy towards him [Gyan],” Kingston told Ultimate FM.

“I’m not close to the team, but watching from afar, you can feel that something is not right. For example, during the Uganda game, I could feel Gyan didn’t stamp his authority.

“One instance he wanted to take a free-kick and another player took the ball from him. You had four or five players around the ball every time there’s a free-kick. That’s not right."

Gyan will be leading Ghana against South Africa in Durban later tonight.