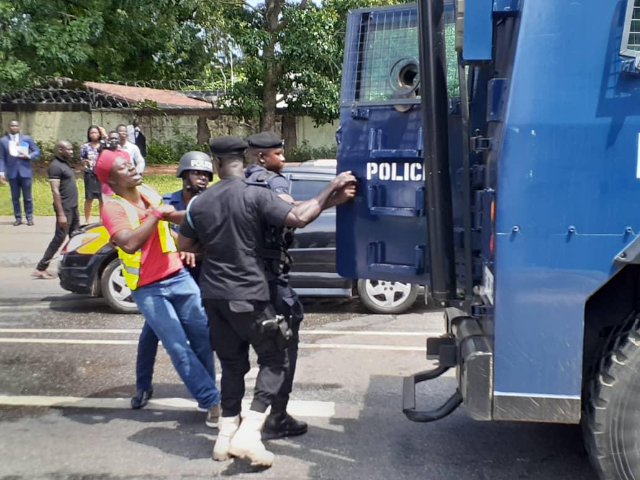 Editor-in-chief of the New Crusading Guide newspaper has described the brutality visited on protesting law students by the police as inexcusable.

Abdul Malik Kweku Baako says the actions of the police were not appropriate.

“Assuming without admitting that they were doing some things that bordered on vandalism, I’m still not too sure the police reaction was appropriate,” he said on news analysis show, Newsfile, Saturday.

The law students’ demonstration was to dramatise their frustration with the education system following another mass failure in the law school entrance exams.

Many individuals and organisations have registered their disapproval by the brutal assault that the police meted out to unarmed and peacefully demonstrating law students and their sympathisers on Monday.

At least nine protesters were arrested in a protest demanding reforms in Ghana’s legal education system.

They were hit with rubber bullets and drenched with water shot from water cannons.

Footages and photographs show several infractions against the rule of law and of humaneness on the part of the security agency.

OccupyGhana, one of the groups which have condemned the police’s high-handedness is demanding of the police, the General Legal Council and government “to be guided by the principles outlined in the Constitution that all power emanates from the people and not the other way round.”

Commenting on the issue, Mr Baako told host Samson Lardy Anyenini, that the police did not act professionally in handling the protesting students.

“An institution like the police is expected to be professional in handling these things. Maybe we must go back to see how our police are trained to control crowds”.

Kweku Baako has called on the Inspector General of Police (IGP) to address the brutality meted out to the law students by the police.