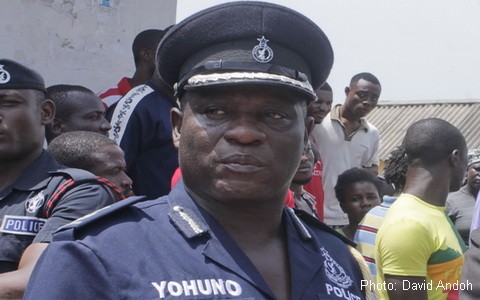 This follows the latest multiple armed robberies in the area on Saturday that has left at least five persons injured.

This is the second time in three months that residents of the community the neighbourhood .

The regional police commander today visited the area to personally assess the situation and assure residents.

Joy News’ Joseph Opoku Gakpo was with the tour and reports that residents are not pleased with the consistent armed robberies in the area.

Some say it has become increasingly impossible for them to sleep at night and leaving home during the day is even more worrying.

The residents also complained about the lack of security in the area and said if the polices’ presence is felt in the community the crime rate will reduce.

The Accra Regional Police Commander DCOP Christian Tetteh Yohonu said the tour of the area by the police today is to bring the police closer to the people in the community.

He added that “we have already been intensifying our patrols but we need the people to come together and get streets lights to ward off the robbers”.

DCOP Tetteh Yohonu advised the residents to clear bushes around the area because they serve as a hiding places for the robbers.

He also asked the residents to adopt safety measures because “the people who were attacked were those who used wood as their doors. The criminals are unable to have access to homes that have been properly secured.

“No matter how poor you are once you’ve been able to put up structure make sure you secure it well”, he added.

He assured that the police is doing all it can to improve security in the area.

He called on residents to support the police by mobilizing and putting up a police post adding that “the police service is doing its best but the residents need to help”.